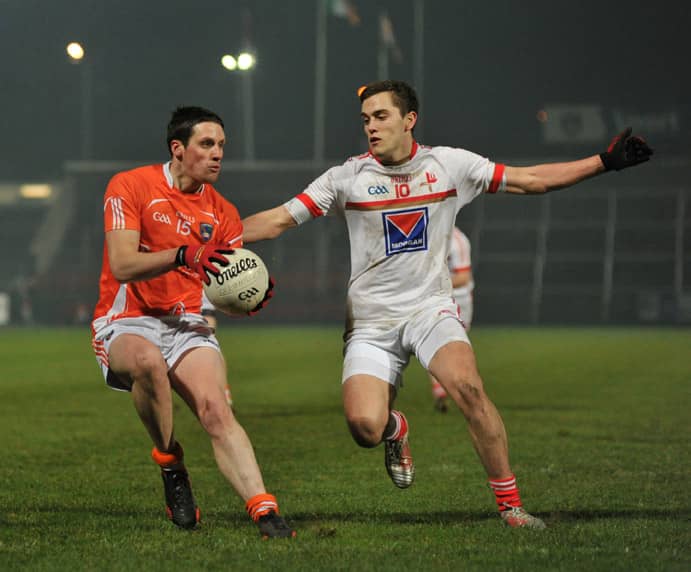 AFTER picking up a valuable home point last weekend against Killeavy, Ballymacnab will be hoping to add to that with victory away to Dromintee this Sunday.

A late equaliser at home last Sunday got the ‘Nab off the mark and manager Sean Hughes was happy with the point gained.

“It was good to get a point,” said Hughes. “I suppose, like a lot of teams last weekend, the weather played a big part. It was a game of two halves with the wind, so all in all, I was happy enough to get a point out of it. As an opener it’s good to get points on the board. We actually kicked the equalising point at the end so you have to be happy enough.”

Ballymacnab, now seasoned campaigners in Division One face a tough opening series of games with Dromintee up first this Sunday before games against Crossmaglen, Armagh Harps and St Patrick’s.

“Every game is going to be tough. From Ballymacnab went up we haven’t really finished that high up the table so it shows that all games are difficult but those openers will certainly let us know where we are.

“Dromintee on Sunday will be a tough one and you certainly won’t get anything soft up there – hopefully the boys go out and perform, that’s all I can ask for.”

With the league shortened significantly this year Hughes knows the importance of a good start and that no game near the end will be a dead-rubber.

“This year with the new league format of 15 games I imagine most teams will be looking to get relatively secure by getting a number of wins under their belt early on.

“Last year we finished fourth from bottom and we won’t want to be going into the latter stages of the league looking for points because with the league due to finish before championship it will remain competitive throughout, no doubt about that.”

He added: “I think from a players’ perspective it helps, it’s more clear cut and gives them a focus. With the league over in August it will leave all those games competitive. Teams will be preparing for championship – even teams that are safe will be using the league as preparation for the Championship.”

An added bonus for Ballymacnab will be the continued availability of Gavin McParland. Early this week, county manager Paul Grimley announced that he will be encouraging his players to get game time with their clubs.

“We’re glad to have Gavin there and it will be good for those players to get playing with their club. He’ll be a big player for us and with Rory [Grugan] being back from France this weekend that will be a major boost too. We need all our men available to us and we will be delighted to have them.”