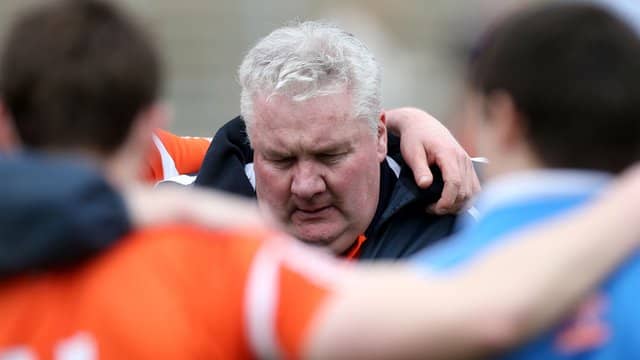 Armagh turned in a massively impressive performance to progress to the final round of qualifiers after defeating Roscommon in Dr Hyde Park this evening.

A goal from substitute Stefan forker six minutes from time was the decisive score as Armagh ran out five point winners.

Stephen Harold, Kyle Carragher, Jamie Clarke, Tony Kernan and Ciaran McKeever all impressed but it was the functionality of defence to attack which takes Armagh within 70 minutes of an All-Ireland quarter-final next month.

They will now face the losers of either the Ulster or Leinster finalists with both games taking place tomorrow.

Roscommon perhaps began the earlier exchanges the brighter and took the lead through an early Diarmuid Murtagh free.

Armagh continued to build well but Jamie Clarke continued to struggle to gather ball in the inside forward line before a second Murtagh free restored parity.

Paul Grimley’s men then began to apply the pressure, firstly through the impressive Tony Kernan, who got his first from play with a a fantastic turn and shot.

Andy Mallon, who travelled the length of the field, pointed after patient build up play – superbly supplied by Kernan – breaking the Rossies’ blanket defence.

Crossmaglen’s Kyle Carragher added a fifth from a great long ball from Ciaran McKeever. Two frees, from Murtagh and Cathal Craig, brought the hosts to within a point.

However three unanswered points before the break from Kernan, Clarke and a fabulous Aaron Findon fisted point left the Orchardmen well in control at the break.

The second half started and it was evident there were some strong words from the Roscommon management. Kevin Higgins scored within seconds of the restart.

Clarke responded for the visitors with a free from the ground before Enda Smith and Tony Kernan traded points. Two Roscommon points brought the deficit back to two.

Kevin Dyas then set up Clarke for one of the scores of the game before Clarke turned provider for fellow clubmate Carragher.

Cathal Shine tapped over for the hosts but on 54 minutes the Cross’ duo were at it again – this time Carragher supplied Clarke who finished off a scintillating move.

Philip McAvoy was then called into action to stop a fierce drop-shot, however, the follow-up result in another Roscommon point.

Midfielder Stephen Harold fisted his first point of the game before Sennan Kilbride responded for the Rossies.

That game-deciding Stefan Forker goal was sandwiched in between a Harold and Aaron Kernan point to leave the gap at six points and effectively end the tie as a contest.  A long high ball in from Aaron Kernan was met on the square by Forker who beat the full back and ‘keeper.

Ciaran murtagh grabbed a consolation goal after Kevin Dyas had extended Armagh’s lead further but Rory Grugan killed any chance of a comeback with a fantastic long range point.

Donal Smith scored late on but it is Armagh that march on.