Armagh Harps too good for Granemore in senior championship 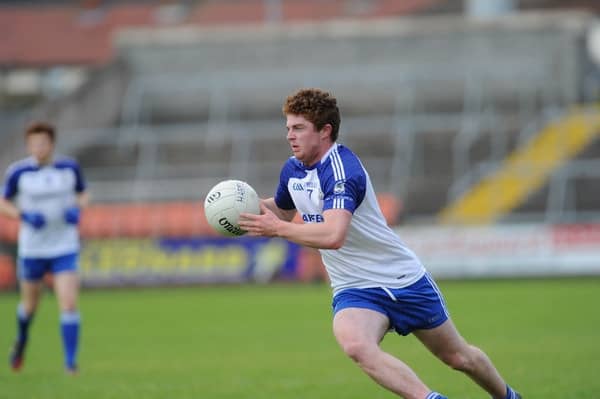 Armagh Harps proved to be too strong for Granemore as they run out worthy winners in the Senior Championship clash, defeating their opponents 1-14 to 0-08.

The Harps took the lead in the opening play and managed to hold on to it throughout, despite Granemore’s greatest efforts.  Harps dominated in the first half but Granemore managed to stay in the game and went in at the break just two points down.  Things began the slip in the second half for St. Mary’s as they made a few costly mistakes and struggled to get into their typical rhythm, Harps run out worthy winners in the end.

Joe McElroy opened the scoring in the first minute when Gareth Swift laid the ball out to him in space, and he finished with his left.  Former Armagh minor captain Declan McKenna went on a great run down the left and passed the ball on to Simon McCoy who put the ball over the bar with great ease.

Harps third came from the capable Ultan Lennon who scored from a free kick off the ground on the left hand side.  Granemore grabbed their first of the game on the 13th minute, Ryan rafferty went on a typically determined run and passed the ball across to Christopher O’Connor who made no mistake.

Ultan Lennon scored another free, but Granemore responded from a free kick of their own, Jason O’Neill putting it over from 20 yards.  Harps were getting more of the ball but Granemore were putting in an effort to prevent them from developing a big lead.

O’Neill struck another free on the 20th minute after Ryan Rafferty had been fouled to leave just two points in it.  This point triggered a few roars from the Granemore support, who were seeking to see a big push from their side, similar to what they seen in their first round victory.

Armagh Harps did respond well though, Connor Coulter scored two points in two minutes, and the first of those could have been a goal. Charlie Vernon played an accurate pass through but Coulter decided against pursuing for goal despite being in an open gap and took the point from close range.

Christopher O’Connor was brought down on the left hand side, and the corner forward jumped straight back to his feet to convert the free kick to put just three points in the game.

Ryan Rafferty scored a top class point on the 28th minute, the lively forward faked a right foot shot, turned the ball on to his left and slotted right between the posts.

Christopher O’Connor then brought made it 0-07 to 0-06 with another free kick, but a point in added time from Ultan Lennon give The Harps a two point advantage at the break.

Both teams exchanged scores at the beginning of the second half, but a fine point from Charlie Vernon triggered a great spell for The Harps.  Karol Loughran then added another when he run on to a great pass out wide from Lennon and struck over.

Simon McCoy almost got a goal for The Harps on the 37th minute, the half forward showed his great pace to race on to a deflected pass and beat the nearby defenders, but he squirmed his shot wide as he lost balance.

Another fine run from Ryan Rafferty resulted in a Granemore point, Rafferty burst forward and passed the ball over to O’Connor who scored his fourth and Granemore’s eight of the game.

Ultan Lennon scored yet another free on the 47th minute, but the big blows for Granemore landed minutes later.  First Darragh Rafferty was dismissed when received his second yellow, and then Harps grabbed a killer goal.  Simon McCoy went on a speedy run and fed the ball to Declan McKenna who kindly passed it on to Swift to give him an easy task of putting the ball in the net, which made it 1-12 to 0-08.

Granemore then missed a penalty on the 58th minute, Padraig Hollywood was fouled close to goal, but Barry Toner, who was the hero in the derby win over Ballymacnab put the spot kick wide.

Late points from Swift and Paul Kelly rounded off a good win for Armagh Harps.  Harps will gain great confidence from this victory, as Granemore are certainly no easy challenge.  They will now face the winners of Annaghmore and Shane O’Neills in the Quarter Final.