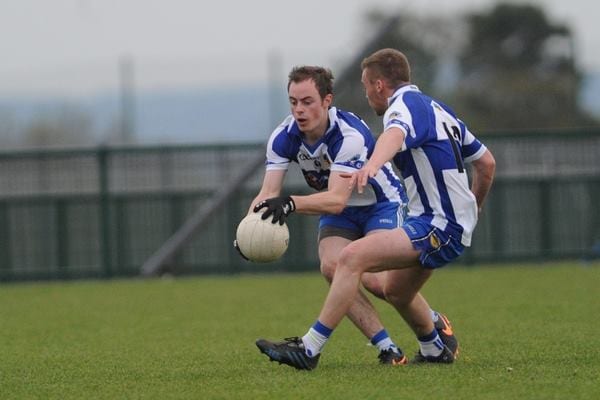 Cullyhanna continued their recent winning run with a fairly straightforward victory at home to Annaghmore on Friday night.

In a game played in unseasonably blustery conditions, St Pat’s had the aid of the elements in the first half and made fine use of this advantage, dominating the early stages thanks largely to the excellence of Aidan Nugent.

Nugent was responsible for four of his side’s opening five points with three of these efforts coming from play.

A good Kieran Hoey point was the other contribution to the Cullyhanna tally as St Pat’s led by five points to one after 20 minutes.

Four minutes later, Tony Donnelly evaded his marker impressively to kick a fine score while Robbie Tasker benefitted from an excellent Gary McCooey pass to kick a point. It was Barry McConville who had the final say in the half as he kicked an impressive score from distance to leave seven points between the sides at the break, Cullyhanna leading by 0-8 to 0-1.

Annaghmore rallied after the break and registered the first three points of the second period to cut the deficit to four.

Aidan Nugent steadied the Cullyhanna ship eight minutes into the second half and the game was finished as a contest five minutes later as substitute Shea Hoey exhibited searing pace to create an attacking opportunity before expertly finding Robbie Tasker with a fine pass.

As Tasker bore down on goal, he unselfishly transferred possession to the onrushing Kieran Hoey who had the simplest of tasks in palming the ball into an empty net for his second goal in as many matches.

With the result beyond doubt, St Patrick’s set about putting some gloss on the scoreline in the final quarter and this objective was aided by three majestic scores from Rory O’Neill to go along with a Eugene Casey fisted point.

Annaghmore responded with a pointed free but a brace of late points from Shea Hoey saw St Patrick’s run out thirteen point victors.

A goal with a minute of normal time to play saw Granemore edge past Tir na nOg on Friday night.

The game, played under challenging conditions, was entertaining despite the abnormally high error account.

Paul Carville opened the scoring for the visiting Portadown men with a superb free from the ground, to the right and close to the sideline.

Shane Rafferty then hit three unanswered frees for the home side before Carville responded in kind, but it wasn’t until the 20th minute that we saw the first score from play – an excellent point from Tir na nOg’s Paudi Judge, levelling the scores at three points a piece.

Jason O’Neill added two more for Granemore (one free) before Brian Mallon added his side’s fourth of the evening.

Brendan Boylan slotted over a fantastic effort in the 26th minute before Jack Rooney and Jason O’Neill made it 8-4 going in at the break.

The second-half was slow to kick into gear but it was the visitors that registered through the left foot of Carville, only for Eoghan O’Neill to cancel that out five minutes later.

The sides then traded points shortly after but with a huge wind in their favour, Tir na nOg began to turn the screw with four points in four minutes to level things up with five minutes to play. Carville’s accuracy from the dead ball was paying dividends for the visitors.

Just when it looked like Granemore were on the brink with their backs against the wall, Eoghan O’Neill found himself free at the end of a well-worked counter attack, with only the keeper to beat; that he did with an unnerving finish to the top corner.

With a staggering eight minutes of injury time – for some unknown reason – the visitors had their chances and managed to pull one back.

However, Granemore’s Jason O’Neill had the final say, slotting over with 66 minutes to confirm the win.

Maghery themselves had a straightforward victory (3-15 – 2-8) over Forkhill to keep them firmly in contention. St Paul’s are now rooted firmly to the bottom of the league after losing at home to Dromintee on Sunday (0-9 – 3-14). Dromintee sit securely in mid-table with Cullyhanna next up for them.

Ballymacnab slipped to a surprise defeat – their first of the season – away to Wolfe Tones on Friday night (1-13 – 1-10). That result takes the Tones into the top-half of the division at the midway point.

Crossmaglen also suffered their first defeat of the season with a 1-11 to 0-12 reversal away to Sarsfields, who now join the current champions on 10 points.

And it was a massive win for Killeavy who beat Carrickcruppen by the narrowest of margins (0-12 – 0-11), to collect their much-needed first points of the season. The result keeps Killeavy in the relegation zone, but just a point off the Camlough men.

Clann Eireann returned to form and joint-top of the Intermediate League with victory away to Silverbridge on Sunday.

The Lurgan men’s promotion challenge had stalled in recent weeks following consecutive defeats to An Port Mor and Madden.

Silverbridge’s Cormac McAvoy opened the scoring with a point within the first minute, quickly followed by another from Pauraic Keating.

A point from a free for Clann Eireann was negated when Jarly Og Burns laid off an excellent ball to Aaron Duffy for a well-taken goal.

Duffy then increased his tally with an excellent point to put the ‘Bridge ahead by six, before the Clann Eireann registered their first score from play with a point after 20 minutes.

A great ball won by Gary Reel in the middle of the field was fed through via Joe Rock to Jarly Og Burns and resulted in another point for the Bridge.

However, Clann Eireann made a strong comeback and reduced the margin to just the minimum at the half time whistle, the scoreline 1-5 to 0-7.

The second half told a different tale as Silverbridge lost all momentum and were wasteful with possession, allowing the Lurgan men to take control of the game and score seven points without reply.

Their misery was further compounded when Aaron Duffy was red-carded in the latter stages of the half.

It was twenty-five minutes before Silverbridge registered their first score of the half when Cathal Lambe fought hard to win possession and set Pauraic Keating up for a well-taken point.

In the last minute of normal time, a penalty taken by Pauraic Keating was saved on the line and redirected over the crossbar for the game’s last score.

Mullaghbawn’s first league game in almost a month was away to Grange on Sunday. A goal for the hosts separated the teams at the break. 0-6 – 1-6.

Grange only added three more scores in the second period, but two of these were goals and the six points that Mullaghbawn kicked were not enough to take anything from the game.

Next Friday, Collegeland visit Mullaghbawn with Grange due to travel to Silverbridge the following weekend.

Madden kept their chase for promotion on track with a three point victory over Shane O’Neills.

A turgid first half saw the score at 0-3 to 0-2 in favour of the home side at half-time.

However, the game improved considerably in the second half and it was goals from Caolan Vallely and Niall Grimley that told the difference.

The Camlough men finished the game with five unanswered points but it was Madden who came away with the all-important two points.

Elsewhere, Keady picked up their first win of the season away to Dorsey (0-5 – 4-10). It looks like Dorsey will be playing Junior football next year unless something drastically changes but Keady will be hoping to avoid the plunge with them and will hope this results acts a springboard to an upturn in fortunes.

Culloville kept up the chase with a hard fought victory away to struggling Collegeland (0-9 – 1-8).

Whitecross sent out a statement to the rest of the league thanks to a 19-point victory over joint leaders An Port Mor (5-10 – 1-3). Whitecross lie two points off the top with two games in hand.

And it was a massive win for Clan na Gael, whose alarming slide to Junior football was exacerbated with four defeats on the bounce before the weekend. A 3-8 to 0-10 victory over north Armagh neighbours Eire Og lifted them out of the relegation zone.

It may not even be the halfway point in the Junior A league, but already St Michael’s are staring down the barrel of relegation following defeat to Crossmaglen IIs.

Newtown started slowest, and the visitors had four points on the board before the home side registered their first score from the boot of Matthew Murray.

Then through some good work from Tommy Carragher coming out of defence, B Davidson slotted over a second point to put Newtown within touching distance.

However, Crossmaglen then rattled in a goal after a scramble in the penalty box.

The hosts then into gear to finish the half with three pointed frees to keep in touch.

Newtown lost Matthew Murray to injury just before the break. The halftime score was 1-06 to 0-5.

Newtown needed a strong start to the second half but it was the visitors who found it easier to forge scores from possession tagging on another three points. Newtown struggled for most of the second half but Davidson was able to add a glimmer of hope when he bagged a goal midway through.

However, the game finished with a whimper as Newtown ambled to a ten point defeat 1-16 to 1-06.

Elsewhere, Lissummon kept pace at the top of the division thanks to a three-point victory (0-11 – 0-8) over Crossmaglen IIs on Friday night.

Corrinshego, also joint top courtesy of a four-point win (1-10 – 3-8) away to Belleek who sit just above the relegation zone on six points.

And three goals from Derrynoose was enough to see them past the challenge of Ballyhegan (0-8 – 3-8). Derrynoose now sit just one point off top spot with a game in hand, in what is becoming a hugely competitive division.

Clady remain top thanks to a narrow one point win over Redmond O’Hanlons. The result leaves the leaders seven points clear of third-placed O’Hanlons.

St Patrick’s IIs keep up the title chase with an 11 point victory over Killeavy IIs (0-4 – 3-6). A brace of goals from Kyle Reid and a major score from Peter O’Neill ensured a comfortable margin of victory.

Dromintee IIs moved above Killeavy IIs thanks to a 3-11 to 0-8 victory away to Clann Eireann IIs on Friday night.