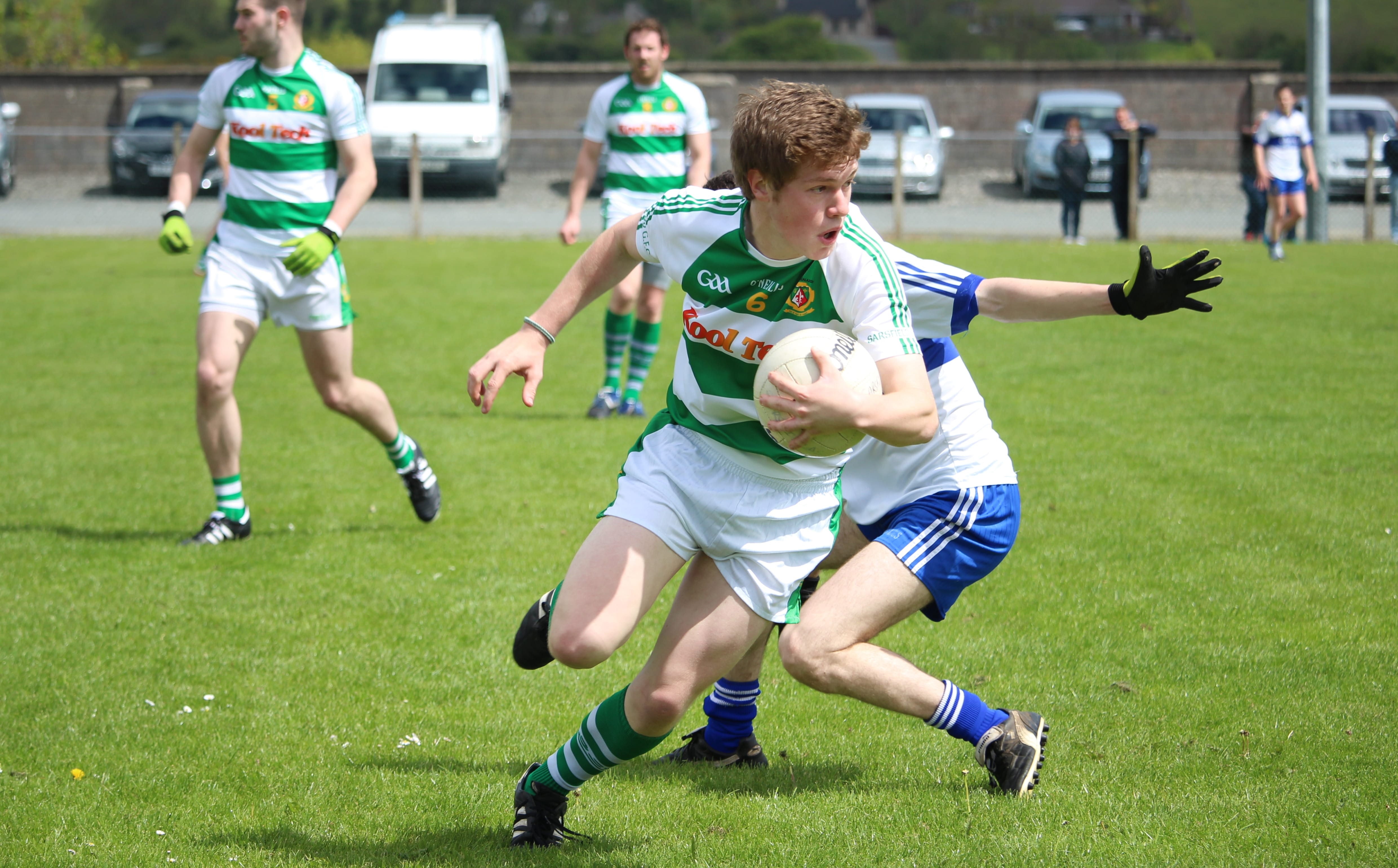 After last week’s underwhelming performance at Wolfe Tones, Cullyhanna were on their travels again on Sunday afternoon as they faced Pearse Ogs in blustery conditions.

Although the Armagh city men registered the first point, the opening stages belonged to St Pat’s as they established a tight grip on proceedings which they were never really to relinquish.

An excellent solo run from Gareth Mackin allowed him to kick an equalising point after two minutes and Cullyhanna soon edged into the lead when Robbie Tasker expertly released Tony Donnelly who fisted over. Gareth Mackin embarked on another incisive run and kicked an excellent score from range to put Cullyhanna 2 clear while a brace of Tony Donnelly pointed free left St Pat’s 5 points to 1 ahead after nineteen minutes.

Pearse Ogs finally converted some of their opportunities with two points from play after 20 and 23 minutes but that brief revival was to be as good as got for the Armagh city men as Cullyhanna closed out the first half in impressive fashion.

Two minutes remained before the break when an excellent passing move resulted in a Robbie Tasker point while Tasker turned provider in injury time as Mal Mackin kicked a fine point.

An impressive conclusion to the half finished with a direct ball forward from Kieran McCooey being won by Kieran Hoey who turned and fired over. That left St Patrick’s 0-8 to Pearse Og 0-3 ahead at the break though in truth, while Cullyhanna were the better team over the course of the half, the margin of that advantage had as much to do with opposition profligacy as Cullyhanna domination.

The opening stages of the second half were fairly even with two pointed Pearse Og frees matched by a fine Aidan Nugent score and an excellent point from Gary McCooey. The crucial score of the match arrived 10 minutes into the half when a defensive error from Pearse Ogs allowed Kieran Hoey to bundle the ball over the line for a Cullyhanna goal.

Eight points ahead with 20 minutes to go, St Pat’s simply needed to keep the scoreboard ticking over to ensure victory and they were well able to do so, principally thanks to the impressive form of Aidan Nugent who lit up the final quarter with three points of the highest quality.

Robbie Tasker also added an excellent score from a seemingly prohibitive angle which meant that the 1-1 added to the Pearse Ogs tally in the latter stages was of little consequence as Cullyhanna ran out comfortable victors.

This was an impressive display from Cullyhanna, probably the best of the season as Pearse Ogs had been in good form recently. Any victory away from home against a top side is most enjoyable and to do so as comfortably as Cullyhanna managed on Sunday is very much worthy of praise.

Cullyhanna welcome Annaghmore for their first home match since April next weekend.

Maghery crashed to their first defeat of the season against Dromintee this afternoon.

The loughshore men made the long trip south but came up short in blustery wet and windy conditions.

Dromintee made most of their superior possession and had Maghery trailing by 3/4 points for most of the match. Towards the end of the match Maghery had a chance to level with a penalty but it was saved by the Dromintee keeper.

Crossmaglen last week’s abandoned game to Ballymacnab on the back burner and continued their run of good form with a comfortable victory at home to Killeavy.

Played in bitterly cold conditions with a swirling wind two goals separated the sides at the interval. Cross’ led 2-4 to 0-4.

Play followed a similar pattern in the second period with Rangers consolidating their first half lead with a further three goals. Killeavy managed a consolation goal but this result further compounds what is turning out to be a miserable campaign for Steven McDonnell’s side.

Next weekend sees Killeavy host Carrickcruppen which will be vital to both teams as they aim to avoid relegation. Crossmaglen make the trip to take on Sarfields.

Wolfe Tones picked up a decent point away to Granemore with a late equalising goal this afternoon.

The hosts took an early four point lead but were soon reeled in as Tones scored four unanswered points of their own. Granemore lead 8-7 at the break.

A Brendan Boylan fluke goal from midfield stretched Granemore’s  lead but three Tones’ points on the trot kept them in the game before the second Granemore goal came midway through the second half.

Points were traded before the North Armagh men snatched their equalising goal in the 59th minute to take a point from this entertaining game.

Granemore can take a huge step towards safety when they host Tir na nOg next weekend while Wolfe Tones welcome in-form Ballymacnab.

Elsewhere, Pearse Og missed the opportunity to go top after they fell to a 1-6 to 1-14 defeat at home to St Patrick’s. However, Armagh Harps took advantage of Maghery’s slip up to go joint top after beating St Paul’s 3-16 to 1-11. Sarsfields remain in the top half after beating Tir na nOg 2-19 to 3-6. Ballymacnab remain on course to challenge for the league title in the second half of the season after hammering newcomers Forkhill 6-10 to 0-8.

Shane O’Neills and An Port Mor played out an entertaining draw in Blackwatertown.

Table-toppers An Port Mor remain unbeaten with Shanes hot on their heels in the race for promotion.

With a strong wind blowing it was the proverbial game of two halves and it was the Shanes who had the wind at their backs in the opening half.

An Port Mor opened the scoring with an early point with Greg McCabe replying soon after for the Shanes before Paul O’Rourke edged his side in front with a well taken point. The Shanes made the most of the strong wind and went on to completely dominate the rest of the first-half.

And added a further seven points with Connaire Mackin (2), Damian Doyle, Paul O’Rourke, Greg McCabe, Marc Feehan and Oisin Murphy all on target as they led 0 – 9 to 0 – 1. A late free from An Port Mor saw them register their second point of the half and trail by seven at the break.

An early point at the start of the second-half saw An Port Mor reduce the deficit to six and minutes later they were right back in the game when they registered their first goal. Two quick fire points from the home side left just the minimum between the teams before they claimed their second goal which saw lead by two points.

At this stage in the game there looked to be only one winner as An Port Mor were totally dominant but to the Shanes credit they kept plugging away and a Micheál Brady point left just one between them.

A Paul O’Rourke point minutes later brought the sides level only for An Port Mor to edge ahead again with their sixth point of the game, but in the dying minutes Paul O’Rourke stepped up to confidently stroke over a tricky free which saw the Shanes claim a share of the spoils on a final score of Shane O’Neills 0 – 12 An Port Mor 2 – 6.

Madden secured another major win today which has has left them in joint-second place, and within touching distance of table toppers An Port Mor.

The Raparees entered this encounter with Clann Eireann full of confidence after last week’s 10 point victory over Dorsey, but the home side knew they were in for a steadier challenge against the Lurgan side, who lost just one league game prior to today.

Ciaran Rafferty grabbed the first point of the game from a free kick, although Clann Eireann cancelled the opening score out shortly after. Points from Niall Grimley Paul O’Reilly and a second free kick from Rafferty opened up a health margin for Madden, as they looked quite strong early on.

Aaron McKenna struck a fine point from play, before Paul O’Reilly and Niall Grimley doubled their personal tally’s which meant Madden were flying high, leading 0-07 to 0-02. Clann Eireann did hit back with a healthy spell just before half time, knocking three between the sticks, but a point from Kyle Morgan meant that Madden went in at the break with a healthy 0-08 to 0-05 lead.

Clann Eireann’s scores just before the break came as a wakeup call for the Raparees, beforehand they seemed to be sailing to victory, but after getting a first-hand look at Clann Eireann’s firepower up front they came out in the second half with a slightly more cautious approach.

Free kicks from Caolan Rafferty and Paul O’Reilly helped them stretch the gap to four. But the real killer blow came when Kyle Morgan grabbed a three pointer to put Madden 1-10 to 0-06 ahead. Madden only secured one more point in the remainder of the game through Aaron McKenna.

But that’s all they required, closing out a five point victory over the north Armagh side, who they now sit level on points with.

It was a big week in the Junior B League, the top two sides, Cullyhanna II and Clady, fought for top spot on Thursday evening – and the underdogs Clady came out on top by four points.

St Pat’s II started off stronger, dominating possession early on, and grabbed the first three points of the game. Clady’s first score came through team captain, Sean Smith, it was a point which was badly needed as the home side were threatening to break away.

Cullyhanna grabbed an early goal but Clady struck back immediately through the motivated Damien Devlin, the forceful midfielder went on a rampageous run from the half way line, smashing through the St Patrick’s defence before squeezing an attempt into the bottom corner of the goal.

There wasn’t much between the sides at all, both showing why they are sitting at the top of the division. Cullyhanna regained the lead when they slotted a penalty past Ciaran Savage in the Clady goal midway through the first half.

But yet again Clady didn’t drop their heads and responded with a three pointer of their own, Paul Clarke collecting the ball 14 yards from goal, dodging a challenge and smashing the ball home off the underside of the crossbar.

Hugh Mc Sorely grabbed another point for Clady as they went in ahead by three at half time. An ideal first half performance for Clady who are seeking their first league title since 2006.

The trend continued in the second half, concentration didn’t fade and the pressure only increased. Sean Smith, Malachy McGeown and Paul Clarke notched over three consecutive points at the beginning of the second half.

St Pat’s only really shook themselves together with 15 minutes to go, they began to take over possession and prevent Clady’s pacey forwards from getting on to the ball. But Clady’s defence helped their side hold on to the two points, frustrating the oppositions attack and forcing them into difficult shots.

Rory Woods’ Clady side now sit in top spot with the toughest fixture ticked off their list. If they can carry their form into second half of the season, the Monaghan man may just secure a promotion in his first year in charge.