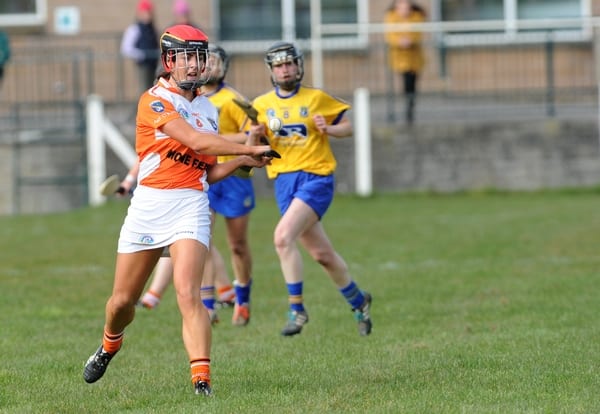 On Sunday Roscommon travelled up to Meabh O’Neills in Camlough to take on Armagh. The 2 O’Clock throw in was seen by the biggest crowd to date at any of the Armagh girls games and after the performance that was showcased by both teams, the spectators journey would have been well worth their while. Weather conditions were perfect, with the ground heavy for both teams.

A very strong Roscommon were on the attack straight from the throw in, but Ciarrai Devlin stood strong in goals and managed to strike the first threatening ball out to the wing. Hannah McGeown and Siodhna Woods raced their way out to the sideline and working together they managed to get the ball back up the field. Roscommon not backing down made their way back into the forward line and Aisling Rogerson got the first score of the game for the Rossies, hitting the ball under the crossbar out of the goalies reach.

The Orchard girls undeterred by Roscommon’s early goal were able get there first score on the board with Ciara Donnelly striking the ball between the uprights 4 minutes in. Armagh were more than capable of keeping up with the strength of Roscommon who were, without doubt the most physical team Armagh have met this year. Bernie Murray was unstoppable in midfield, not allowing the Roscommon girls to push her around. Number 4 Claire McKinley was strong in the backline and her ability on the high catch helped move the ball quickly from the danger area. Grainne Kelly held her position in centre half back and her performance played a pivotal role in the Armagh girls win.

Roscommon were awarded a free and Niamh Coyle sent the ball soaring over the bar. Armagh worked hard to narrow the score difference, they got the ball up the field to Niamh Markey and Shelly McArdle who were hassling the goalkeeper and doing their best to rattle the net but it was to no avail. Roscommon making the most of their chances got another point, edging further in front of Armagh who were still lagging behind with one point. Armagh’s lack of scores in the first 20 minutes wasn’t from a lack of trying, with the girls working hard to make the most of every opportunity, but falling slightly short.

Bernie Murray powered up the field passing the ball of to Niamh Markey, Niamh then hand passed to Sarah Mooney who was running directly for the goals in what was an excellent goal opportunity. With no other options to keep Sarah from scoring the Roscommon defence fouled Sarah Mooney awarding the Orchard girls a free within scoring distance. Ciara Donnelly took a fast free and drove the ball low on the ground into the corner, in the hope of bringing the Orchard girls back into the game but the ball was blocked back out by Roscommon’s strong defence.

Eimear Hayes was in usual good form as well as Siodhna Woods as the wing half backs, not giving their players an inch, despite the Roscommon forwards constantly changing and switching positions – keeping the Armagh girls on their toes and making them constantly think. Nicole Conway worked tirelessly in full back and made a tough barrier for Roscommon to try and break through.

Sarah Molloy was defending hard even from the half forward line and it was worthwhile when she was awarded a free. Ciara Donnelly was able to easily put the ball over the bar from this free, leaving a goal in the game at this point.

Roscommon were forcing through the wall of Armagh’s defence but Grainne Kelly was able to get her stick to the ball driving it along the ground to Nicole Conway, who was able to double on the ground ball that found Siodhna Woods, who drove the ball up the line.

Ciarrai Devlin was tested again by the Roscommon forwards, but staying composed she used her strong puck of the ball to drive the ball out to the wing – out of danger. Armagh were driving up the field with serious intensity to close the goal gap before the half and Niamh Markey and Shelly McArdle worked well together in the forward line to make that happen. Niamh Markey made a pass to Shelly McGuigan who was moving with pace towards the square and was able to catch the pass and drive the ball into the corner of the net.

Roscommon then brought two girls on to the team bringing fresh legs before the end of the first half. Andy McAlinden was very helpful tracking back from her midfield position sweeping a ball that dropped behind the Roscommon half forwards and breaking through the Roscommon barrier.

The score was tied at one goal and two points each at half time, leaving the second half all to play for.

Roscommon started the second half just as the first half, on the attack from the start and were looking a goal with their first opportunity but stroke the ball wide. Undetered by their first goal attempt they were straight on the attack again which resulted in a free. From the free Niamh Coyle sent the ball into the back of the net with a powerful strike.

Ciara Donnelly got her first score from play after Bernie Murray sent a perfect ball into Ciara’s hand and Ciara confidently put the ball over the bar. Not to be outdone by Armagh’s score Roscommon got the ball back down the field and over the bar.

Armagh’s Sarah Mooney was then replaced by Ciara Hill after a game where she excelled herself, going in strong for every ball and moving the ball into her full forward line. Bernie Murray managed to get her first score on the board 7 minutes into the second half after receiving a ball from Siodhna Woods who made a serious catch in the half back line. Eimear Hayes also was tenacious in the half back line, tackling hard and walking out with the ball.

Bernie Murray was defending from the Armagh full forward line ensuring the ball stayed in the danger zone and trying her best to get a score. Collette McSorely was next to be introduced replacing Niamh Markey who’s work rate was second to none throughout the match. Ciara Donnelly then struck a point for the Orchard girls from a 45. Collette McSorely took no time getting into the game but her first score chance unfortunately went wide. She did however make up for this sending the ball over the bar minutes later. Ciara Donnelly was very unfortunate with two possible goal chances that were blocked out but her sister Leanne Donnelly made up for in beautiful fashion hand passing the ball into the corner of the net from a tight angle, giving the Roscommon goalkeeper no hope of reaching it.

Armagh were on the attack and their fitness began to show at this point, however Roscommon’s strength at this time didn’t falter leaving them still tough competition. Ciara Donnelly managed to get the last score on the board for Armagh driving the ball high between the uprights.

Louise Loughran was the final substitute to be made for Armagh coming on for Shelly McArdle with only minutes to spare. Roscommon were last to score getting another point on the board before the final whistle leaving the final score Armagh 2-8 to Roscommon 2-4.

Next outing sees the Armagh Team travel to Kerry for the final game of the league. This is a crucial fixture for Armagh as it will determine the play of positions for the semi final places. All roads lead to Kerry for Sunday 20th March, venue yet to be announced.