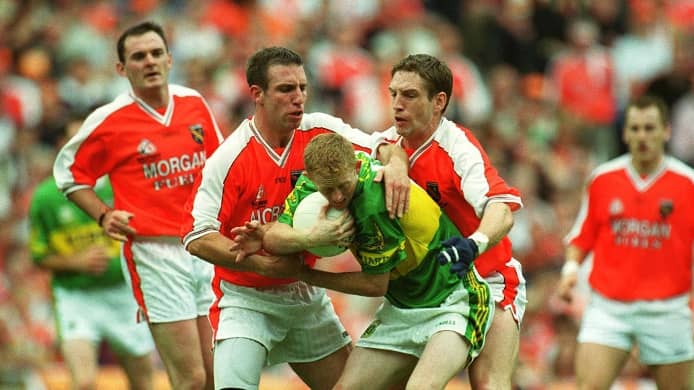 Former Armagh player Enda McNulty says it’s a “disgrace” the team he was part of during the noughties did not win more All-Ireland titles.

McNulty played corner-back in a team that landed the Orchard county’s one and only Sam Maguire in 2002, under the guidance of Joe Kernan.

However, the 2002 All-Star claims Armagh were “in a position to win nine”.

In an interview with Irish Tatler Man magazine, reprinted in today’s Irish Examiner, McNulty said: “That team, without a doubt, was a failure.

“We’ll go to our grave with that regret. Armagh were in a position to win nine All-Irelands and we won one.

“You might say to me, ‘Enda, that’s not very positive.’ No, but it’s realistic. That team had the leaders, had the skill, the adversity-quotient, the power, the physicality, the defence, the scorers.

“It is a disgrace that team only won one All-Ireland.”

In the same period, the others of the big three, Kerry and Tyrone, won a combined eight All-Irelands titles.

“It’s not about the other actors on the stage being better; we didn’t do it. As good as Kerry and Tyrone were, we lost to weaker teams. We were good enough on those big days that we lost. We were six points up at one stage against Kerry in the quarter-final in 2006.

“After Tyrone in ‘05 (All-Ireland semi-final), Kerry ‘06 and Derry ‘07 (first-round qualifier), I literally struggled to get out of bed.”