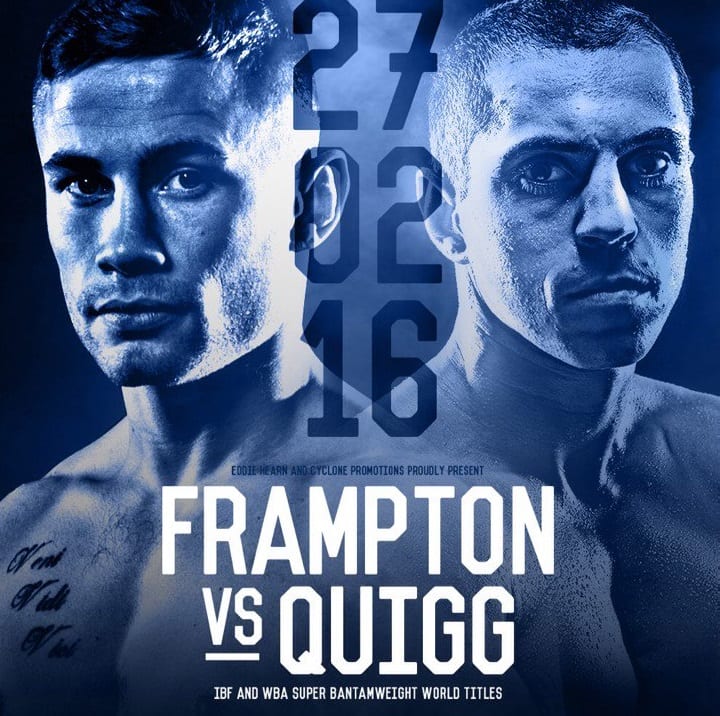 It’s arguably one the biggest fights in a generation for the people of Northern Ireland and those of you looking tickets will be disappointed.

The super-bantamweight unification bout between Belfast’s Carl Frampton and Bury’s Scott Quigg sold out in under 10 minutes – staggering. 19,500 tickets that is!!

Promoter Eddie Hearn tweeted: “Waiting on official times but SOLD OUT in under 10 mins!”

Waiting on official times but SOLD OUT in under 10 mins! #Quiggframpton

The bulk of tickets on sale in 30 mins from https://t.co/2Fqi3ZXu4J this will sell out fast! Be quick #FramptonQuigg — Carl Frampton (@RealCFrampton) November 20, 2015

However, fans reacted angrily as tickets became available shortly after on the ticket website Stubhub.com at inflated prices.

@EddieHearn yeah, sold out to touts how have them on resale on StubHub – it’s bollox #FramptonQuigg pic.twitter.com/2Vg1IdBq4W — DaveyB Boxing (@BrainsOfBoxing) November 20, 2015

Tickets on the site are currently going for as much as £1,600 for a floor seat and £1,000 for a mid-tier view. Tickets originally being sold for £40 are now going for a whopping £265. Hopefully it was mainly The Jackal’s fans who snapped them up. Speaking at the press conference, Frampton said: “I will have more fans in the arena because he is not a massive ticket seller. “A lot of people want to watch this fight and so he may get a bit of a fan base off that, but he is not a huge draw. “I don’t know what it’s going to be like for him to be standing on the ramp in Manchester, his home city, and getting booed. “It would have been a shame if it didn’t happen. It had to happen for boxing. “I have always said I would fight him in Manchester. I think I can knock him out and I probably will later on.”

@EddieHearn something needs to be done about this for sporting events and concerts it’s a joke that these companies get massive batches — Matthew (@Collo_MJ) November 20, 2015

Did you manage to get your hands on a ticket? Tickets for Carl Frampton v Scott Quigg on re-sale for a whopping £1,600