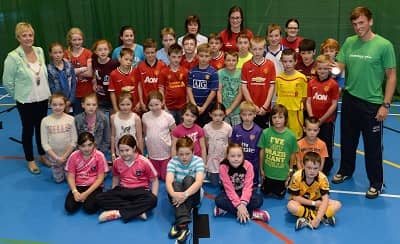 Lord Mayor of Armagh City and District, Councillor Cathy Rafferty, has thanked and paid tribute to Armagh man Tiernan Oliver, when he took time out on Friday to show off his Bronze Commonwealth Games Medal to the 75 children taking part in this year’s Orchard Leisure Centre Crazy Summer Scheme.

They were among nine rowers representing Northern Ireland.

Tiernán, from Armagh City, has been a part time casual attendant at the Orchard Leisure Centre for almost five years, while studying Common and Civil Law at Queen’s University Belfast.

It was during this time he developed a keen interest in rowing and joined the Queen’s University Boat Club.

Tiernán, recalling his Scottish success, said: “I was overwhelmed standing on the podium receiving my medal. Starting at Queen’s, I never thought I would be in with a chance at International level so soon. The past few years of solid training has certainly paid off.”

The Crazy Summer Scheme youngsters, aged between eight and 12, were enthusiastic to see Tiernán’s medal and get pictures taken with him.

He added: “I was delighted to have the opportunity to show the kids my medal, to see their interest and explain how I achieved it.”

“The kids’ reaction here today is evident of that, his commitment and success is incredible, and I wish him well in his future sports career.”