Charity the winner in Cowboys’ tournament! 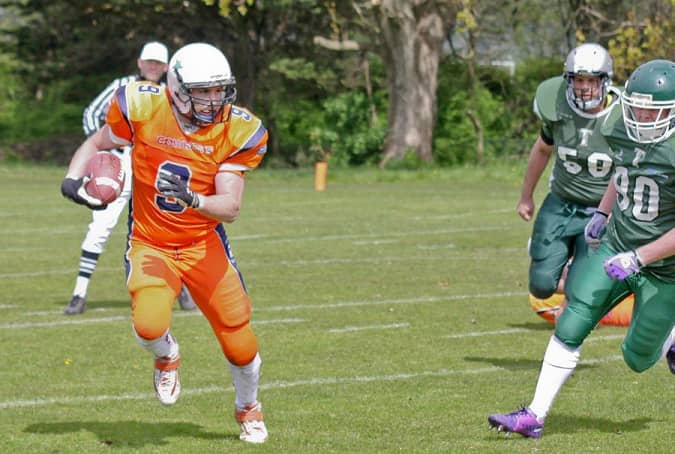 AN American football Charity Tournament in aid of Marie Curie proved to be a huge success, with some tough, hard hitting football on show and a lot of money raised for a great charity!
Craigavon Cowboys are very pleased to announce that £750 was raised for Marie Curie Cancer Care, which topped off a successful day’s football on Sunday at Portdown.
Head Coach Greg Loughran said: “All the hard work in the build-up to the tournament was all worthwhile when we heard the total we were able to raise. In today’s world, where money is that little harder to come by, it is great to be able to raise that impressive total, and that figure does not include the amount given to the bucket collections on the day, which went straight to the Marie Curie charity, so a big thank-you must go to those involved in the whole day, especially to the Cowboys’ Commitee, who pulled this whole event together.”
Although it was a successful day off the pitch for the Cowboys, it was a dissappointing one on it, as the excitment of the event seemed to get to the team, as they experienced a slow start before picking up the pace – although the experience will provide the new Cowboys with some vital game time and an insight into where they need to be!
The Tournament Trophy winners were as follows:
Cowboys Charity Trophy Winners: Belfast Trojans 2nds.
Cowboys Charity Cup Winners: University College of Dublin 2nds.
Cowboys Charity Plate Winners: Craigavon Cowboys 2nds.
Tournament MVP: Dave Calvin (Belfast Trojans).
Craigavon Cowboys MVP: Mark Beattie
Fair Play Award: North Kildare Reapers.
Group Results:
Craigavon Cowboys 2nds 20-24 North Kildare Reapers
North Kildare Reapers 6-6 Waterford Wolves
Craigavon Cowboys 2nds 14-14 Waterford Wolves
Belfast Trojans 2nds 19-0 Mullingar Minotaurs
UCD 2nds 13-0 Mullingar Minotaurs
Belfast Trojans 2nds 12-0 UCD 2nds
Cowboys Cup Final:
UCD 2nds 19-6 Waterford Wolves
Cowboys Plate Final:
Craigavon Cowboys 2nds 20-6 Mullingar Minotaurs
Cowboys Trophy Final:
Belfast Trojans 2nds 13-6 North Kildare Reapers.