Bell the toast of Tullyroan Oval on Sunday 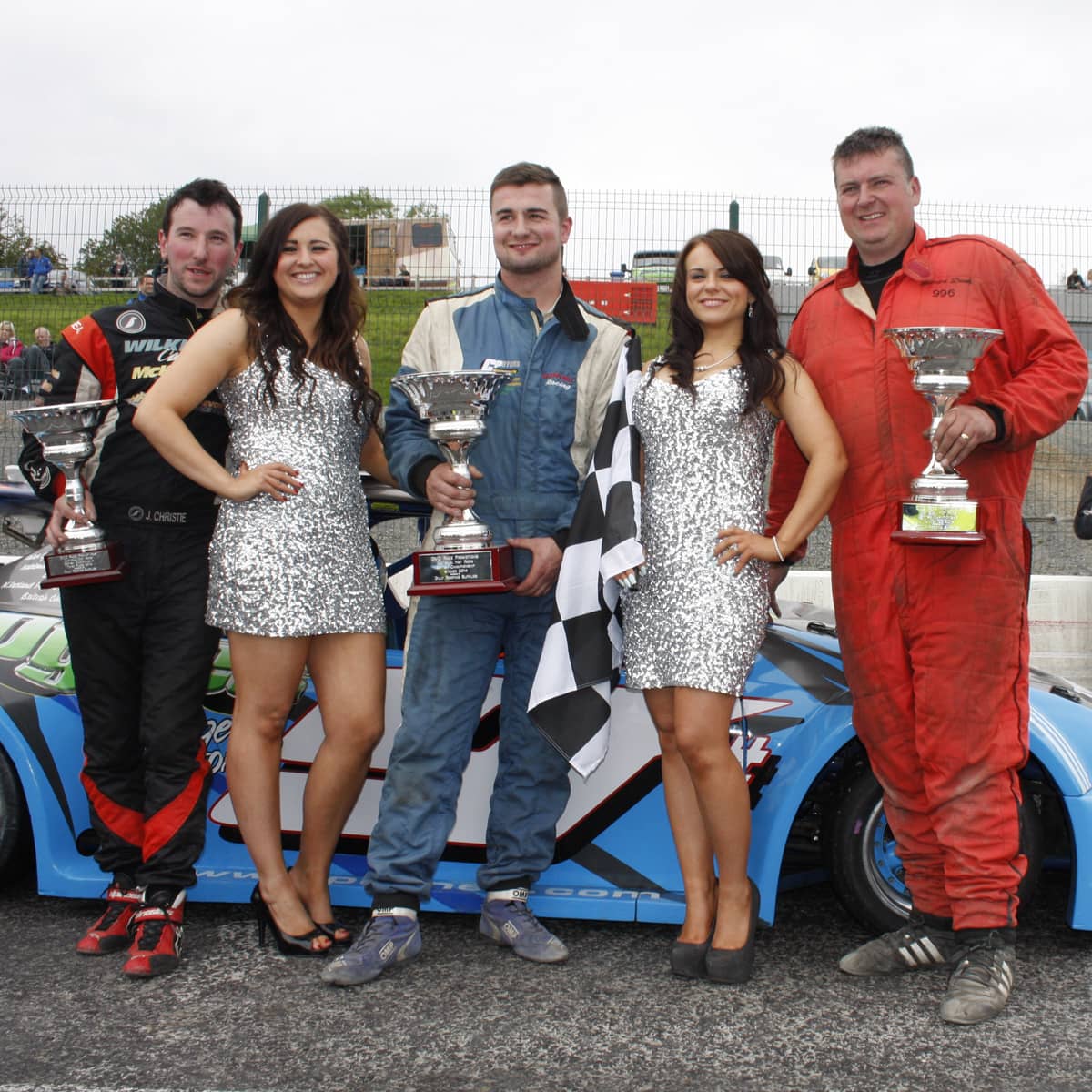 For Whom The Bell Tolls.. Portadown’s Glenn Bell was the toast of Tullyroan Oval on Sunday afternoon, when he successfully retained his National Hot Rods British Championship crown in front of a huge Speedweekend crowd. There were a whole host of visiting rivers in action across the classes, with the other major title of the day falling to Surrey’s Chris Roots as he clinched victory in the Superstox National Championship.

Following qualifying heats at Aghadowey the previous evening, Bell lined up on pole position for his British Championship defence, with Scotland’s Robert McDonald alongside on the front row. McDonald dropped off the pace early on, as Bell stretched clear over Adam Maxwell, John Christie and Stewart Doak. Doak got under Christie for third, before a caution period just before the halfway mark for stricken cars on the raceway.

On the resumption of hostilities, Bell again edged clear as the battle raged for second. Doak got the better of it in the end, but he had no answer to Bell’s clear lead by this stage. Having taken the National title just a month ago, Bell basked in the glory of his second major win of the season. Fellow Portadown racer Doak was a deserved second, ahead of Christie and Maxwell.

The National Hot Rods also raced for the Leslie Dallas Memorial Trophy, being staged for the first time some twenty five years after the death of the legend of the sport. Shane Bland from England led the early exchanges, fending off advances from Cork’s Shane Murphy and Christie. They just couldn’t make their attempts for the lead stick, and the next man to try was British Champion Bell.

In a masterful display of driving, Glenn dragged his car right around the outside of Bland for a tremendous win over England’s Billy Wood and Andrew Murray.

The blossoming Superstox formula saw Tullyroan stage the first major title race to be held in the province for many years.  From a large field, the enthralling heats were shared by Scottish duo David Frame and European Champion Stuart Gilchrist.

The National Championship final turned into an absolutely tremendous race, as local favourite Gary Grattan edged ahead early on before being sidelined by a big hit from Gilchrist. Another Scot, Barry Stephen, then moved to the front before some big bumper action saw cars in every direction on the Annaghmore end. Chris Roots used all his experience to come out in front, and despite the best efforts of Gilchrist he took the flag and the National Championship crown. Behind runner up Gilchrist, Norfolk’s Matt Carberry completed a mainland top three.

The Tullyroan Challenge Cup was the feature race for the 2.0 Hot Rods, with the first heat falling to Portadown’s Stuart Cochrane after fine drive, ahead of Adam Hylands and Stephen Emerson. Local ace Joel Richardson took the second win of the day, with Hylands again impressing as he returned to second once again ahead of Scotland’s Kerr Paterson.

Hylands was by far the class of the field, and romped away in the final from pole position to record an emphatic victory over Richardson and Emerson.

Bedfordshire’s Dean O’Dell didn’t take long on acclimatising to the Tullyroan track on his first visit, taking the opening heat win in their Tullyroan Challenge Cup despite huge pressure from runner up Ben McCully. The second heat saw a win for Jonny Cardwell, ahead of Limerick’s Colm O’Sullivan.

O’Dell led the opening laps of the final, before giving best to the fast moving Cardwell. Jonny raced ahead to record a great victory, with O’Dell great value in second ahead of young Marc Morrell in third.

Another healthy field of ProStocks assembled to contest the Golden Helmet, and recently crowned Irish Masters champion Stuart Agnew continued where he left off the previous week with a heat one win over Steven and Alan Haugh. Heat two was blighted by a huge engine blow up for Stephen McCready which necessitated a lengthy clean-up operation. A race order mix up at the restart saw the result declared before the stoppage, handing the win to Greg McMullan over Dean Fleming.

The final was all about European Champion Fleming however, as he got the early break to power ahead and take the chequered flag by some distance. Alan Haugh and Agnew filled out the podium places.

The stars of tomorrow in the Junior Productions also raced for their Golden Helmet trophy, with recent form man Jordan Robinson taking the first heat over Shane McMillan and Graham Fegan. Ethan Dilly took the second win of the day in heat two, with McMillan again the runner up and Co Cork’s Ian Riordan in third.

From pole position McMillan fought a rearguard battle against the rest, and managed to keep them at bay all the way home to lift the Golden Helmet. Riordan was the man in second when it mattered after a hectic last few laps, with Cameron Dynes inheriting third after both Bradley McKinstry and Fegan were demoted for various misdemeanours during the race.

Racing continues at Tullyroan Oval this Sunday, September 14th, at 2pm. The popular Matches and Dispatches event for the National Bangers returns, and with hearses and limos the only permitted cars it is quite an event. The 1600 Thunder Rods contest their Tullyroan Challnge Cup, with other action scheduled from the 2.0 Hot Rods, Lightning Rods and 1300 Stock Cars.