Work to start shortly on restoration of William McCrum grave 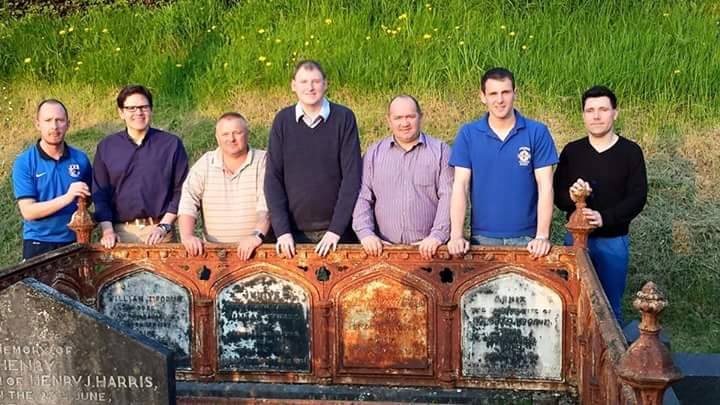 Work is due to begin shortly on the restoration plans for the grave of penalty kick inventor William McCrum, Armagh I can reveal.

It is hoped that the first week of May will see the contractor on site at St Mark’s Parish Churchyard and, if all goes according to plan, the work should be completed over the summer.

All met on site at the grave to discuss the way ahead.

It was also agreed that a service of dedication will be held in August when the grave is restored, when it could be expected that a number of high profile guests will be in attendance. FIFA agreed to pay for the work, having made a decision at a recent IFAB meeting held in Belfast, which came just days after the launch of the campaign to raise the estimated £7,000 required.

The grave of William McCrum, who came from Milford, has fallen into a shocking state of disrepair in the grounds of St Mark’s Parish Church in Armagh.

A statement had confirmed the great news of funding: “The IFAB acknowledged the contribution of the late William McCrum, who, as a member of the Irish FA, proposed the idea of the penalty kick in 1890.

“FIFA has agreed to fund the restoration of William McCrum’s grave, which has fallen into disrepair.”

Down but not out, Northern Ireland football fans in the County Armagh village of Milfor decided to see it through themselves – and the determination was unprecedented.

Milford NISC’s Philip Johnston had welcomed the news and said they were “over the moon”.

Philip and all involved are now looking forward to seeing the project getting underway.