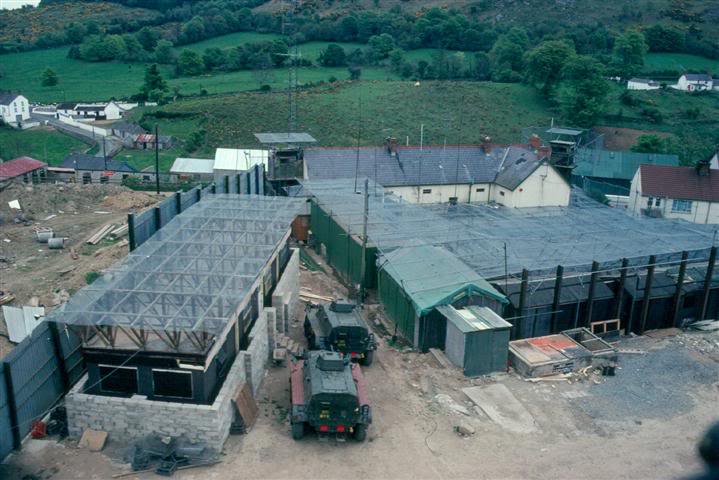 Work is due to start on a major ‘open space’ project on the site of a former military base in south Armagh.

Armagh I first revealed plans for the project – which includes a number of elements to benefit the Forkhill area – back in March last year.

It followed on from a housing scheme at the site of the base, which was dismantled under the terms of the Good Friday Agreement.

Now former Rural Affairs Minister Michelle McIlveen has confirmed the details of our original report and announced that work is due to start on what is now being billed as the ‘Forkhill Greenspace’ project.

The £350,000 scheme is jointly funded by the Department of Agriculture, Environment and Rural Affairs and Newry, Mourne and Down Council.

It involves the construction of an 800 metre pathway together with a number of environmental features, while complementary street furniture will meander round the perimeter of the former military base site.

The pathway has been designed in such a way that it will not compromise any future development on the site and will also protect a number of mature trees.

Among the other features which Armagh I highlighted from the plans last year was a curved entrance feature in stone to welcome people to Forkhill – spelled in both the English and Irish.

There would also be a scaled model of the peaks in the Ring of Gullion. Poles, all scaled to represent the heights of each, will be set alongside an interpretation board, in what is being billed as an ‘outdoor classroom’.

Another key feature of the plans submitted last year was for a ‘compass’, made up of decorative paving and the ‘fingers’ pointing to locations across the island, such as Belfast, Dublin, Slieve Donard, Rathlin Island, Donegal Town, Carlingford, Limerick and Galway.

The outgoing Minister McIlveen said: “The Forkhill Greenspace project will provide a state of the art walking track which will not only enhance the local environment, but will also provide a means for local residents to improve their health by enabling them to exercise in a safe environment.

“It will also help improve education through the provision of an outdoor classroom and other nature linked features.”

Acknowledging the start of the Greenspace Project, Mayor of Newry Mourne and Down District Council, Cllr Gillian Fitzpatrick, commented: “The forthcoming pathway works at the former barracks site, offers the local community a great opportunity to have a new recreational space within the village which young and old can benefit from using.”

Chairman of the Forkhill & District Development Association (FADDA) Raymond McCumiskey added: “We are delighted that work on the Greenspace project has commenced and we acknowledge the commitment from DAERA and Newry, Mourne and Down Council, as regards the provision of the funding for the project which will significantly enhance the village and represents a further step in the redevelopment of this site.”

The work is being carried out by McAvoy Construction NI and the project will be managed by Aecom.

Newry, Mourne and Down Council has accepted responsibility for the future maintenance of the facility.