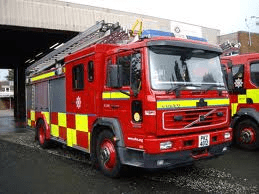 A 31-year-old woman received treatment for burns and smoke inhalation after an accidental chip fan fire in Portadown.

She was treated by Fire and Rescue Service at the scene before being taken by ambulance to hospital.

Fire service say the cause of the blaze appeared accidental.

A sounding smoke alarm alerted occupier to the fire and firefighters from Portadown station attended the incident.