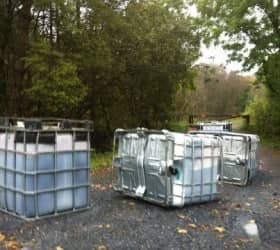 TAXPAYERS have paid out more than £130,000 to clean up the aftermath of fuel dumping across the Armagh Council area.

It has been revealed tonight that, during the last financial year alone, a total of 348 pods of toxic sludge had to be removed in 74 separate incidents of dumping.

The information has been passed to Armagh I by SDLP Councillor Thomas O’Hanlon, who said it is money which could be saved and better spent if the community acts together to turn in those responsible.

He said: “This week council officers advised us that there were over 74 separate incidents of fuel dumping in the year 2012/2013.  This ranged from single pods being dumped in isolated locations, groups of three, four or five pods dumped on the side the road and we have even had incidents where container lorries of cubes have been dumped and they contain 32 cubes each time.

“Officials tell us it costs approximately  £375 to dispose of each pod and that’s not taking into account any haulage costs so that equates to over £130,000.

“During that year the then Environment Minister Alex Atwood MLA removed the burden of paying for this disposal from local councils and this is now carried by the Northern Ireland Environment Agency, but it still all comes from the one source, which is us, the taxpayer.

“This is a hideous crime. Yes it is a criminal act and those responsible evade taxes but, what’s more, it’s a crime against communities and a crime against our environment. Those responsible for dumping their sludge target well-known beauty spots or rural back roads and they don’t think of their consequences. Whilst they count their profits we count the costs of their actions.

“Earlier this year I hosted a high level meeting in Armagh with all the agencies involved in tacking this blight on our communities and we have seen greater co-operation between the agencies as a result.

“We need to get the message through to those involved – you and your sludge are not wanted in our communities!

“If you talk to any of the communities where these cubes are dumped you get a real sense of public anger.

“£130,000 might not be much involved in this activity, but if this wasn’t wasted on cleaning up this mess, think of the nurses and teachers it could employ, think of the difference it would make to a community group or sporting organisation in this area.  Those responsible need to be aware the cost of their actions is more than financial.”