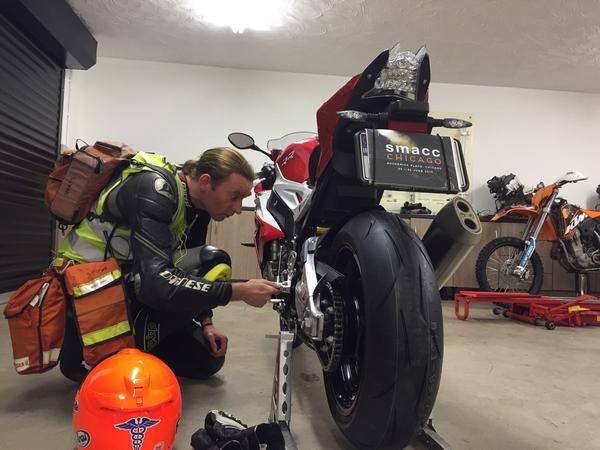 Dr John Hinds – known as the ‘flying doctor’ – has died after an accident at Skerries, it has been confirmed.

The Tandragee medic divided his time as an anaesthetist at Craigavon Area Hospital and as a consultant in intensive care.

He was one of a team of two unique ‘travelling doctors’ which formed part of the Motorcycle Union of Ireland’s medical team.

Along with Dr Fred MacSorley, he was able to carry out roadside treatment at motor racing events, including emergency surgery.

In May he had been at the North West 200 where he helped to save the life of a spectator after a freak accident on the circuit.

Indeed, he has saved countless riders lives at races and brought the campaign for an air ambulance here to Stormont.

But the popular Dr John died during a practice session for the Skerries 100 Road Races last night (Friday). “With deep regret the family of Dr John Dermot Hinds announce his sad passing,” they said via Facebook.

“They would like to give grateful thanks to all involved in his care. R.I.P.”

Friends and colleagues have been paying tribute on social media.

Among them was David Stephens, who provides similar medical assistance at the annual Isle of Man TT Races.

He wrote on Facebook: “As I come to the end, this year, of my 40 years involved in providing medical services at motor cycle events, the last 35 here in the Isle of Man, I shed tears when I heard the news of John’s loss.

“What a tragedy for the amazing medical set up in Ireland and for all his family and friends. Everyone here on the Isle of Man involved in road racing is at a loss for words trying to come to terms with the enormity of John’ passing.”

We at Armagh I would like to express our heart-felt sympathies to Dr John’s family, friends and colleagues at this time. May he rest in peace.