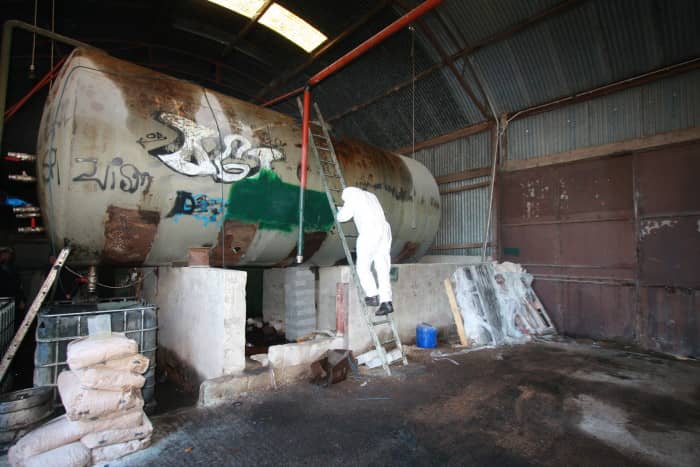 The largest ever toxic waste dump linked to diesel laundering in the UK has been uncovered at a farm in Co Armagh this morning (Tuesday) by HM Revenue and Customs (HMRC).

Nearly 50 tonnes of waste – the by-product of this illegal process – was removed from the site.

The illegal diesel plant is estimated to have been capable of producing 20 million litres of illicit fuel and evading around £12.5 million in taxes a year.

It was discovered in a livestock shed by HMRC officers, accompanied by officers from the Police Service of Northern Ireland and Environmental Crime Unit, as they searched a cattle farm in the Forkhill area of south Armagh.

As well as the toxic waste, officers also removed 2,000 litres of illicit fuel, pumps and equipment during the operation.

Pat Curtis, National Oils Coordinator, HMRC, said: “Every illegal diesel laundering operation typically generates tonnes of toxic waste, but this was the largest amount we have ever uncovered at a single site in the UK.

“As taxpayers and local ratepayers, not only are we missing out on the stolen tax that ends up the pockets of the criminals, we are also paying the substantial clean-up and disposal costs, which will be around £25,000 for this site alone. Buying illicit fuel not only funds crime, it supports and encourages these dangerous activities within our communities.”

Investigations into the illegal fuel plant are continuing.

Customs officials have said the discovery has averted “a potential environmental disaster”.

Minister Durkan said: “This could have been a disaster for people in the area and for the environment. Fuel laundering and the reckless dumping of the highly toxic waste products is totally irresponsible and very dangerous. It harms communities on a number of levels and shows a total disregard for the environment of Northern Ireland on which we all depend on for our quality of life and livelihoods.

“The money spent on cleaning up after criminals could be much better spent in Northern Ireland to secure a better environment for the whole community.

“This operation was robust and a clear example of co-operation in action by my Department’s Crime Unit and law enforcement agencies within the Organised Crime Task Force.

“While there are many challenges for DOE in dealing with this and other environmental crime issues, I am confident that my officials will continue to play the fullest part possible in tackling this activity.”