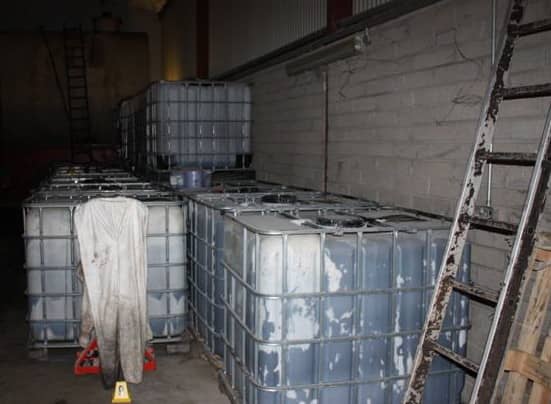 A diesel laundering plant capable of producing 19 million litres of illicit fuel a year, evading around £12 million in tax, has been dismantled by HM Revenue and Customs (HMRC).

Two men, one from Jonesborough and one from Dundalk, have been arrested in connection with the find.

HMRC officers, accompanied by the Police Service of Northern Ireland, searched an industrial unit in the Jonesborough area on Tuesday night (21 October), where they removed nearly 24 tonnes of toxic waste and around 42,000 litres of green diesel. A search of a derelict farm building nearby revealed a huckster site – an illegal filling station – where cash and 2,500 litres of suspected illicit fuel were seized.

Mike Parkinson, Assistant Director, Criminal Investigation, HMRC, said: “Every illegal laundering operation typically generates tonnes of toxic waste, involving significant safety and environmental issues. As taxpayers and local ratepayers, not only are we missing out on the stolen tax that ends up the pockets of the criminals, we are also paying the substantial clean-up and disposal costs.

“It is wrong that honest businesses should be undercut by criminals and those involved in making or selling laundered fuel. Buying illicit fuel not only funds crime, it supports and encourages these dangerous activities within our communities.

Pumps, equipment and two vehicles were removed during the operation. Both men were interviewed by HMRC and have been released on bail pending further enquiries.