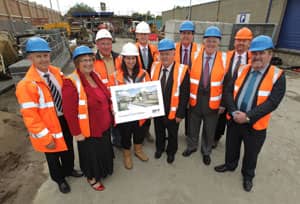 TRANSPORT Minister Danny Kennedy has been in Portadown to announce that the town’s upgraded rail station will be handed over to Translink within the next two or three weeks.

The £4.6m upgrade – with a £2.44m grant from the European Union Interreg IVA programme – has been carried out by Newry-based contractors Felix O’Hare.

The work has transformed the station, which has not been fit for purpose, as it was built during the 1960s to replace the old station at Edenderry.

“The station was not aesthetically pleasing prior to the facelift, but at least it’s close to the town centre,” said Mr Kennedy.

“Not only is the major facelift improving its look, but it will address accessibility problems and make the station compliant with disability legislation.”

A lift is being installed at the Woodhouse Street entrance to the station, replacing the original 30 steps up to the concourse that made it impossible for the disabled and mothers with prams to make it.

And the walkway and lifts to take passengers across the lines are well advanced.

Other main innovations include a cafeteria and shop at the entrance, a totally re-designed entrance with upgraded ticketing facilities, a new entrance from the Wilson Street direction, and a general extension.

The Minister added that his visit to Portadown further underpinned the importance of rail service to Northern Ireland, especially as the upgraded Coleraine-Londonderry line had come on stream this month.

“And Portadown is one of just four stops for the Enterprise en route from Belfast to Dublin,” he stated.

He added that almost 90 per cent of the work had been completed and he was keen to see more investment in the rail system, but that financial restraints were holding this back.

The project will be fully operational by mid-summer 2013, when there will be an official opening.