'When the family come back it would bring a tear to a stone. These guys are big strong massive builders and the majority of them had a tear in their eye. They were crying' 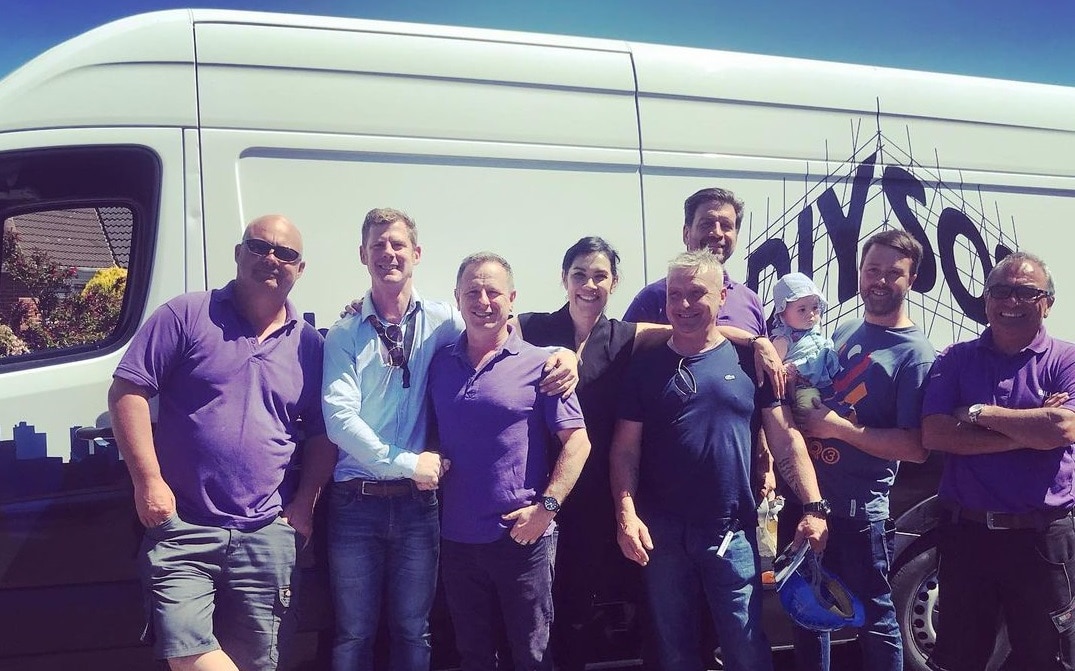 It feels like DIY SOS has been on our televisions for an eternity, so it would be a surprise to hear the team has never visited Northern Ireland.

However, next week’s big build will feature the McCreight family from Bangor, who had almost given up hope of sorting their housing issues.

Mum, Mandy (48) has Ehlers Danlos Syndrome, Postural Orthostic Tachycardia Syndrome, Fibromyalgia and Gastroparesis and she had spent 80% of her time bed bound.

Caring responsibilities for the family fall on medically retired dad, Davy (59), who has a back injury, burning feet syndrome and problems with his knees.

Now, 20 months on from the transformation by Nick Knowles, the Purple Shirt team and a legion of volunteers, the show will be aired on TV.

Part of the cohort who arrived to take on this mammoth task in June 2019 was Tandragee firm, Crannymore Construction.

Speaking to Armagh I, owner Neil Odgers said that he would jump at the chance to volunteer again and admitted there wasn’t a dry eye in the house after the family’s reaction to the final reveal.

The 39-year-old commented: “The big question people always ask is did you finish it in the nine days? The truth is we finished it a day early, it was some turn around!”

Neil saw an advertisement for the project in early 2019 and decided to tentatively throw his hat into the mix. “We initially applied for a few days, simply because it is all voluntary and I knew that we would have our own work to be doing as well,” he said.

“Then we got called to go do an interview with Mark Millar in Bangor. He gave a us a run down of the work and was just checking to see if everyone was clued in.”

Neil was then contacted by Mark and was asked to get involved, initially agreeing to help out at the start and end point of the project.

However, on day two Mark spoke with Neil and persuaded him to have his team offer their services throughout the week.

On the first day, 100 volunteers descended on the home and, according to Neil, within an hour and a half the property was gutted and ready for the real work to begin.

“It was really good craic, every tradesman who was there was very switched on; there was never anyone standing about,” he said.

“We were maybe upstairs doing structural work or doing steels or putting doors in and then coming down for your 10 o’clock break and there was a wall there that wasn’t there before.”

Describing the whole crew as a “family”, Neil, who has worked in the industry for over 20 years, revealed it was an experience like no other.

“With it being voluntary, it was funny,” he said. “If you go to a normal building site the spark would be giving out about the plumbers and the like but it wasn’t like that because everyone was doing it off their own steam.

“I have never seen it before, the sparks were actually bending backwards to help the joiners and the joiners were helping with brickwork, everything just worked really well.”

Due to speed, as regular viewers will be aware, mistakes do happen but they are always put to right on time.

“There has to be mistakes which has a knock-on effect but, because of the manpower, it can be done and redone three times but still be ready in time,” Neil said.

He commented that the environment was relaxed, with the SOS team on hand to feed the volunteers with bacon rolls, dinner and even a bun with their builders’ brews!

The typical day for Neil and his team started at 7am, with them making the trip to Bangor and not returning until 7pm, but their work was not finished there, as they continued making bedroom units until midnight.

Speaking about the final reveal, he said: “When the family come back it would bring a tear to a stone. I am telling you these guys are big strong massive builders and the majority of them had a tear in their eye. They were crying.

“If you are watching on TV and you don’t see the process of it all, you think to yourself look at them children but if it didn’t bring a tear when the family came back there would be something wrong with you.”

According to Neil the “feel-good factor” made the whole project worth it.

He added: “It will be exciting to see it all, the family were ever so nice, ever so grateful and really appreciative of us.

“People ask would I do it again and my hand on my heart if someone asked you, you couldn’t not do it again. Doing work, doing it free just makes you feel like a king.” Neil said that all of the Purple Shirt team were “down to earth” and always had time to speak with the volunteers.

“They are under a lot of pressure, with the camera on them, they are doing their own work and running the site. They always had time for you, it is only five minutes of their time but it means a lot.”

Turning to the issue of the building trade at the moment, Neil said: “We have been busy. At the start [of the pandemic] it was a bit scary going into people’s houses. A lot of our work is private but we have been working with people to find the best solution.

“Brexit has also had a big impact. Some standard building materials have not been available and then there have been price hikes.”

He added: “We did a lot of pricing say four months ago before Christmas, then got asked to carry it out. A lot of the materials have gone up in price but we honour our initial price. We wouldn’t ask people for more but it leaves us in a sticky situation.”

You can catch the DIY SOS Big Build next Monday on BBC One at 9pm.