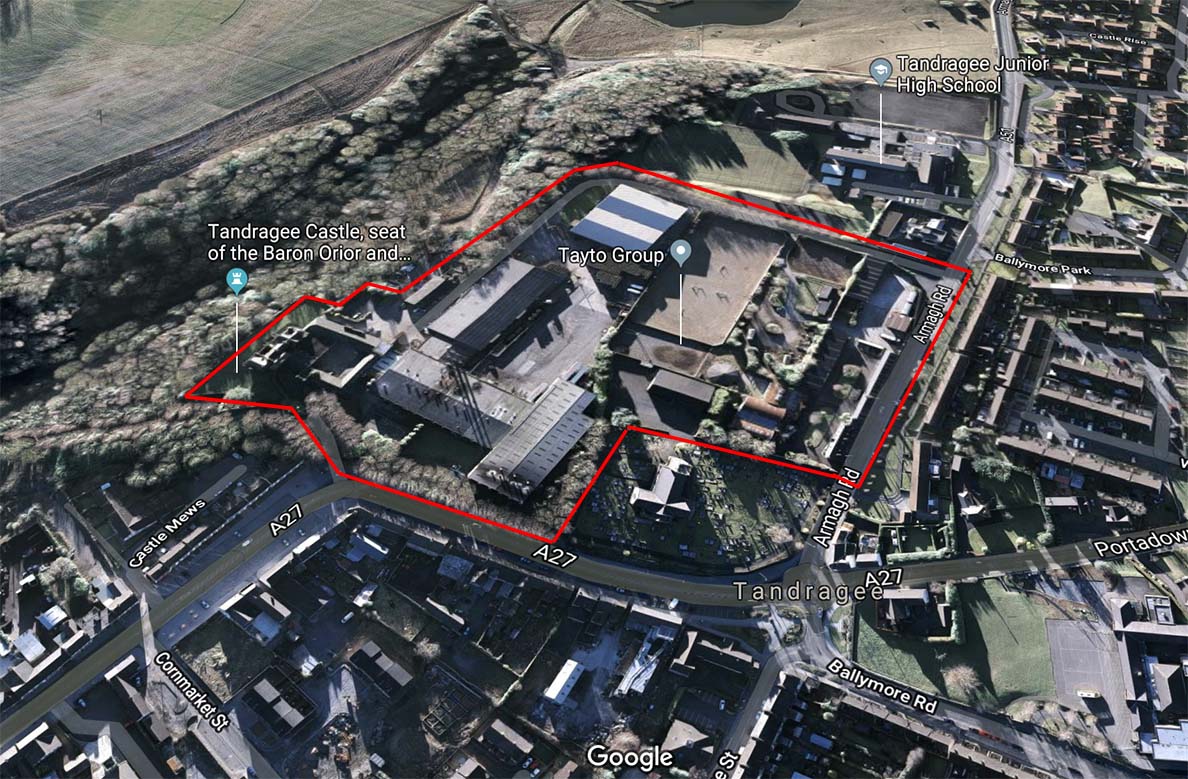 Plans to build houses within an historic walled garden at Tayto Castle – part of an investment of more than £4 million on the Tandragee site – are back on the table.

The development would consist of 34 properties within the grounds of the castle, home to the world famous crisp and snacks giant, and it is understood to cost close to £3 million.

A second application for the site relates to a warehouse extension and basement car parking at Tayto, which would see close to £1.5 million being spent.

It is 10 years since bids for outline planning permission was made.

Now reserved matters applications have been submitted to Armagh City, Banbridge and Craigavon Borough Council. Such applications relate to outstanding matters not considered at the time.

Archaeological reports submitted with the outline planning application 10 years ago describe a large former walled garden located to the north west of the castle.

All that remains today are the enclosing stone walls.

Towards the end of the 18th Century it was shown on maps as a church meadow and farm land.

But Ordance Survey maps from 1835 indicate that by that time it had been formerly marked out as a walled garden. The map also shows a ‘hot house’ located within the enclosed area.

Within two decades, an updated map indicated that the garden had been divided and a weighing machine had been installed in the northern half of the site.

A later saw mill occupied the site, of which only the chimney remained.

The reserved matters application is one of two which will be publicly advertised this week.

Both have been submitted in the name of Tayto’s chief executive Paul Allen.

The housing development would be located on what is described as agricultural and industrial land.

It would involve the demolition of existing outbuildings within the former walled garden.

A total of 34 houses would be built, and private and public ‘amenity space’  provided.

And it would see the creation of a new access – for both vehicles and pedestrians – off the Armagh Road.

The site of the development is given as Tandragee Castle, on “lands 32.0m west of St Mark’s Church Of Ireland Tandragee 50.3m North of Tayto Castle Factory Tandragee and 75m east of Tandragee Junior High School”.

The second reserved matters applications relates to a warehouse and basement car park extension to the existing Tayto factory and also includes road alterations, landscaping and all associated site works.

The applications will now be considered by planning officials and decisions made in due course.