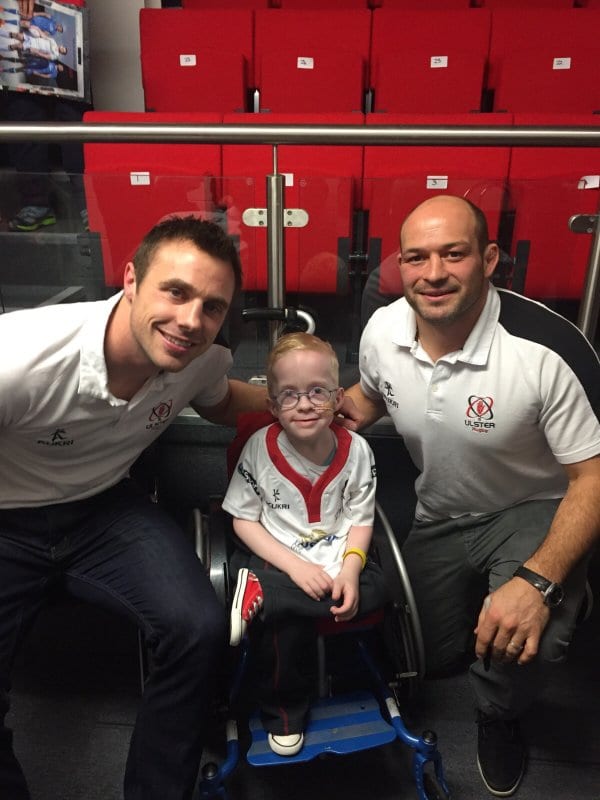 An eight-year-old Tandragee boy with a rare genetic disorder had yet another dream come true this week when he met his sporting heroes.

Little Blake McCaughey, a pupil at Ceara Special School in Lurgan, was proud as punch when he got to chat with Rory Best and Tommy Bowe.

Ulster-mad Blake, a pupil at Ceara Special School in Lurgan, made a huge impression on the local rugby aces.

And they too on he. Blake’s condition means that he cannot eat or drink and has to be fed through a tube for 12 hours a day.

But he’s a lively lad and lives life to the full, as mum Christine explains.

She told Armagh I: “Blake’s a wheelchair user but doesn’t let it hold him back.

And he has met his golfing hero too – thanks to the Make-A-Wish Foundation.

Blake makes an impression on everyone he meets and the local community has taken him to their hearts – a truly amazing and inspirational wee man.

Through a series of fundraisers, the community in County Armagh and across Northern Ireland stepped up to the mark and raised the money necessary to buy him a special custom-made lightweight wheelchair to aid his mobility, which he was presented with just over two years ago.

Mum and dad, Christine and Andrew, were absolutely thrilled. The family, including little sister Pixie, were also able to travel to Disney World and savour the sights, the spectacle and the excitement of this magical place.

Arranged by the Make-A-Wish Foundation, Blake got to meet Portrush golfing great Graeme McDowell while there, given a special tour of his Nona Blue Restaurant in Orlando!

So he’s well used to meeting the great and the good but this week was something really special!

With Tommy having ruled himself out of Ireland’s Six Nations campaign to recover from surgery, and Rory still hotly tipped to captain when the tournament begins in February, the sporting stars have been in the headlines.

But the local legends got to meet another local legend and were happy to chat, pose for pictures and sign autographs.

“Blake loved it so much,” beamed Christine.

“He has been singing the songs all day and telling everyone in school about getting his shirt signed by the boys – and asked when the rest of the team are signing it!”