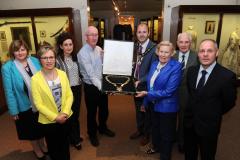 Forty-two years after it was presented to the local council and the Deputy Mayor’s chain of Armagh has been handed over to Armagh County Museum.

The presentation was made by Armagh City, Banbridge and Craigavon Borough Council Lord Mayor Darryn Causby.

Lord Mayor Causby handed the chain over to Sean Barden and Sarah Millsopp at the Museum.

It was last worn by former Ulster Unionist Councillor Joy Rollston. She was the last Deputy Mayor of Armagh, serving alongside Sinn Fein’s Cathy Rafferty as Lord Mayor.

They donated the chain of office to the council in 1963, with the agreement that that, when Armagh City and District Council ceased to exist, the Deputy Mayor’s chain would be passed to the Museum.