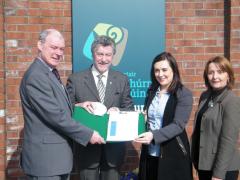 Video footage of the stunning scenery around south Armagh has been handed in, alongside a petition, as the campaign continues to have ‘Gullion’ included in the new super-council.

There was outrage when it was decided that the new council be named Newry, Mourne and Down, with no mention of Gullion.

Campaigners has declared it a snub to the people of South Armagh.

But now a petition with over 1,000 signatures has been handed over to Liam Hannaway, the chief executive officer of Newry, Mourne and Down Council, demanding a rethink.

The petition was accompanied by DVDs – to be given to councillors – highlighting the “unique cultural significance of the area”.

Mr Brady said it was important that the area was recognised as a unique and important part of the new council.

“It’s simply unacceptable that south Armagh has been left out of the name of the new council,” he said.

“As a distinct cultural region, steeped in the history and folklore of Ireland, it forms an essential part of the identity of the new council.

“That is why we have included DVDs of a BBC documentary about Slieve Gullion with the petition to be handed out to each of the new councillors. They do a marvellous job in highlighting just how unique the area is and how much it brings in terms of culture and history to the make-up of the new council.

“The SDLP and unionist decision to block any inclusion of Gullion or South Armagh in the name of the new council was a deliberate snub to the people of the entire area.

“Only a few days ago we saw the SDLP once again showed their contempt for the people of the area when their Environment Minister Mark H Durkan cut 100% of the NIEA funding to the Ring of Gullion Area of Outstanding Natural Beauty.

“We will also be challenging this attack on the area and already our MLAs on the Environment Committee have questioned the Minister on his disastrous mishandling of his budget.”

Megan Fearon said the decision to keep south Armagh out of the name of the new council had caused great hurt and anger in the area.

“South Armagh is an area with incredible tourism potential and at a time when we are trying to raise its profile this double blow dealt by the SDLP has caused a serious backlash,” she said.

“Many local businesses, community and voluntary groups and individual residents have contacted me and my colleagues to register in the strongest terms their anger at this decision.

“We are calling on the council to reconsider its name and introduce something more reflective of the entire region.”

South Armagh councillor Roisin Mulgrew said the response on the ground to the petition had been huge.

“People were delighted to see that something was being done about the name, that we weren’t taking it lying down and they really got behind us,” she said.

“We had no problem getting over 1000 signatures for this petition and, prior to that, more than 120 business and community representatives wrote letters of objection to the council.

“In response to the decision to cut the funding to the Ring of Gullion AONB a petition was set up gathering the required 1000 names in just a few days.

“I hope that the new council will recognise the depth of feeling on this issue and respond in the only appropriate manner, by renaming the council to something more inclusive.”