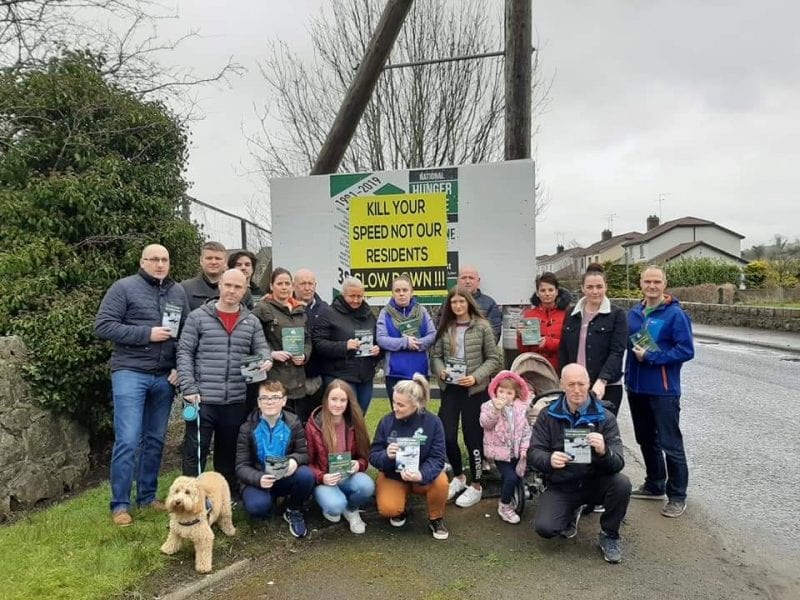 A full traffic and safety assessment is to be carried out in a south Armagh village after a very visible campaign by residents.

It was prompted after a child was knocked down by a vehicle passing through Camlough, sustaining serious injuries.

Locals had erected signs and taken to handing out flyers with the message: “Kill your speed not our residents.”

Now Slieve Gullion area Sinn Féin Councillor Oonagh Magennis has confirmed that the Department for Infrastructure will conduct a study.

The councillor also praised the residents of Cloughan Court and Cashel Close for their efforts in highlighting their concerns.

She said she and colleague Cllr Declan Murphy had joined residents to launch a campaign which highlighted major speeding and safe crossing concerns in the areas of Cloughan Court and Cashel Close.

Said Councillor Magennis: “A written request to the Department for Infrastructure asking the Roads Minister Nichola Mallon to address the major safety concerns that local residents had, has prompted the announcement of a full traffic and safety assessment into the A50 Newtown Road into Camlough.

“We have requested that the assessment includes the possibility of a pedestrian island, traffic calming measures, the provision of a footway from Cloughan Court towards the local primary school and improved road signage.

“It is essential that data like collision incidents and speeding detection are included in this assessment. These are the main issues that continue to cause huge concerns to pedestrians and in particular the residents of Cloughan Court and Cashel Close and I commend all for their efforts in highlighting them and demanding they be addressed.

“Speeding detection enforcement measures on that stretch of road will be ongoing. Whilst we await the report from this study, I would urge all motorists to drive sensibly and safely in the Camlough village locality and in particular adjacent to Cloughan Court and Cashel Close estates.”