I don't want it to be a case of just staying the night and then leaving. I want people to remember being there. I want to do hot-tubs and yoga classes, star-gazing, create a whole experience." 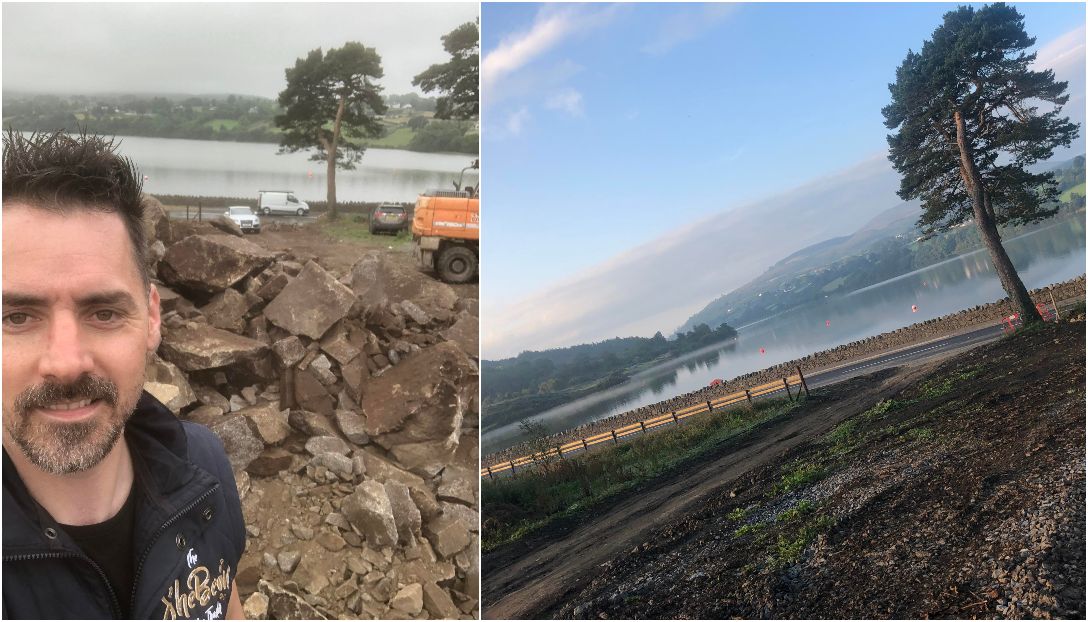 On a given day, the picturesque surroundings of Camlough Lake could rival some of best postcard scenes in the world.

One particular vantage point, next to the south Armagh beauty spot, has Camlough Mountain positioned to the left, Slieve Gullion straight ahead, and Topnet Mountain to its right. When the sun shines, the lake glistens in the middle.

But to date, its tourism potential has remained relatively untapped.

However, moves are being made to change that.

While Karl Toner may have been blessed with having inherited long-held family land, an entrepreneurial vigour has helped him forge a future for tourism at the lake. The 38-year-old has recently been granted planning permission to transform a field, adjacent to the Newtown Road, into a hugely-exciting tourism hub.

His plans include glamping pods, tent pitches and tepees, complete with communal campers’ hub, cafe/tearoom, showers, BBQ and picnic areas and more for visitors to enjoy.

Like any idea, it started as a niggle in the back of his mind, and that idea blossomed over many years spent travelling and working in Australia.

Karl lived in Oz, working in construction for 14 years but, for the last 10 of those years, he had been formulating a plan on getting his site from concept to reality.

“I have been planning this for almost 10 years; I was planning it from Australia,” he told Armagh I. “I always knew there was going to be something good here, because it’s such a class location. Even before the pandemic, this has always been in my plans. I was working at it from Australia back in 2015; I applied for outline planning permission then.”

While that was approved, full planning permission was subsequently knocked back because of the size of the scheme, so Karl enlisted the help of a planning consultant before resubmitted revised proposals.

Karl returned from Australia with an ambition to open a coffee shop at the lake, such was his belief in its potential.

“I went out to Australia before the recession; it was just to go backpacking and do a bit of travelling, see a bit of the world. There were nine of us who went out and I ended up being there 14 years – and I loved it, but this was always the plan, to come back and do this.

“I always knew it had potential; I could see Camlough Lake was starting to grow a bit. It had been developed a little and outdoor sports on it is becoming more and more popular. I knew there was tons of potential but there has always been issues around the lake regarding land ownership and trying to get things done.

“My site is perfect and I knew this was the perfect plan for that site. Plus, I knew from going around Australia, backpacking in different hostels and seeing what way they do things over there, I thought to myself, ‘this could really work in Ireland, at my site’.” It was effectively a blank canvas for Karl who said, as he travelled, he was getting “little bits of inspiration from here and there”.

Karl tested the water by converting a horsebox trailer into a coffee cart, naming it the Shebean Coffee Trailer.

Admittedly for Karl, the horsebox was a reaction to Covid – everything else, was long in the offing.

“This dream started 10 years ago,” he said. “This is not a reaction to Covid. Even since the coffee trailer was set up there have been people from all over Ireland all saying this place is beautiful but there’s just nothing here and asking why is hasn’t been developed. There are no toilets, no changing rooms and nowhere to have coffee. It’s just waiting for it to happen.”

The reaction locally has been as equally positive, so much so Karl hasn’t heard a negative word about his plans.

The process has been a long drawn-out one for Karl, much to do with his 14-year sabbatical Down Under, but the pandemic didn’t help matters either.

“I always planned on having a coffee shop at the lake and then the pandemic happened. The next thing, everyone was doing horse trailers and I was like, ‘okay, that could be a good way of testing the water here and see what works’.

“Since I opened it has been flat out; I’m there seven days a week. Everybody is delighted; people are saying they have a reason to come knowing that it’s there, it has really added to the experience of the lake.”

So when are we likely to see Karl’s dream become our reality?

“The most difficult part has been getting planning passed, and this project won’t all happen at once,” he admitted.

“It will probably be all done in stages and it will grow from there. Maybe I’ll start with a trailer and a few pods and re-invest the money back into growing it and move onto the next phase. “I’ll see what people want; what appetite there is for it. I don’t want to put something up and then think, ‘oh, maybe I shouldn’t have done that’.”

Karl is clearly open to feedback, an important aspect of any business. Everyday he sees the needs of so many, from swimmers to paddle boarders, and his hub will be reflective of their needs – all year round.

Karl has engaged with the tourism agencies and is currently working on a business plan.

But for now, groundwork has begun with electric and water works in the pipeline (excuse the pun).

“My aim now is to get the main services in,” he said. ” I have been speaking to suppliers of pods before, but now I have permission, I can begin locking those in. It won’t be happening this year because there is a lot of construction work to be done, but definitely early next year, all going well.”

He added: “I just want people to have an experience when they come. I don’t want it to be a case of just staying the night and then leaving. I want people to remember being there. I want to do hot-tubs and yoga classes, star-gazing, create a whole experience.” To follow Karl’s journey, check out his Facebook page here. Check out his plans for the site in more detail here.