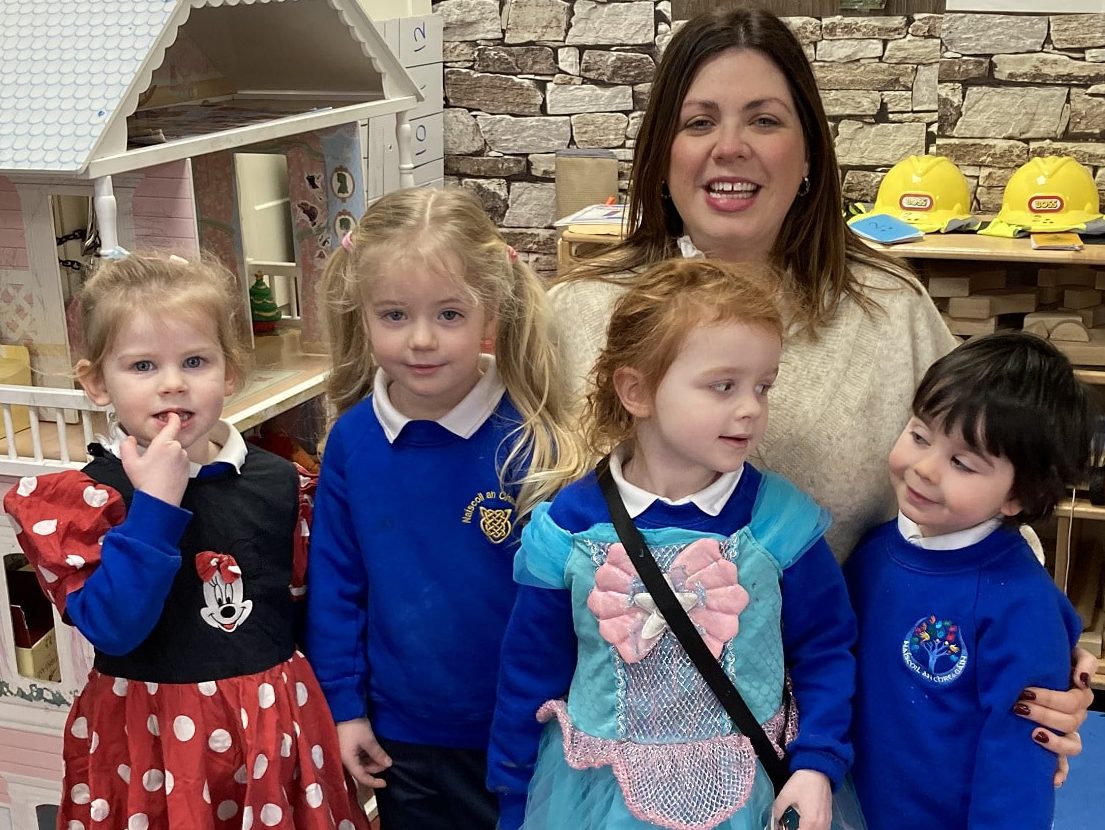 When non-Irish speaker Amie Cumiskey opted to send her eldest child to an Irish medium pre-school, it created a ripple effect within her family and instilled in her a passion for promoting the language.

Amie, who admits she has only “cúpla focail”, is now chairperson of the school, Naíscoil an Chreagáin in South Armagh.

And she is one of many parents who have become convinced of the many benefits of the closely-knit school and of Irish medium education in general.

Based in the grounds of Silverbridge GAC, the Naíscoil has been going strong for more than 25 years and has capacity for 16 children, aged three years plus.

Irish medium schools follow the ‘immersion’ method of education which allows children to acquire the language naturally by being immersed within the Irish language environment.

The most recent Education Training Inspectorate (ETI) report from November 2022 for the Naíscoil noted that “all of the children…are developing their confidence, social skills and friendships” and “there is a collegial approach to all aspects of the Naíscoil”.

Explaining her and husband Hugh’s decision to send daughter Ruby, now aged eight, to the school, Amie said: ” We had the option of a couple of different schools. At that stage, Hugh’s nieces and nephews were at the Gaelscoil in Crossmaglen and he said he’d like the kids to go to the same school as their cousins.

“I was very iffy about Irish medium education, simply because I don’t have it and I didn’t know how I’d be able to manage in terms of homework and communicating with the children.

“But we looked into and we decided to see how it went for the year. What drew me to it was the smaller numbers.”

Within a week, Ruby was coming home, singing and counting in Irish and “just loving it”.

Added Amie: “By the Christmas of that year, we were still not sure but we went for an information evening at Gaelscoil Phadraig Naofa, the Irish medium unit at St Patrick’s PS, Crossmaglen, and came out that evening and thought, “she’s going here”.

“It was the best decision we’ve ever made.” Since then, her son James (5) has also attended the Naíscoil and has just started in Rang 1 in the Gaelscoil.

Added Amie: “A year after Ruby finished, my sister decided to send her daughter Kate to the Naíscoil as well and she is now at the Gaelscoil.

“Then, because the children are all at an Irish medium school, my father and my uncle started Irish language lessons. They used to work together and they had a rule they were only allowed to speak Irish in the van going to work.

“My cousin also decided to send her daughter to the Gaelscoil, so from just one child going, there’s now that wider circle of people who are picking up the Irish language.

“Families like mine come along, we then decide to go on to the Gaelscoil and that’s where the growth in the language in the area comes from.”

Amie attributes the popularity of the Naíscoil to the committed staff and the unique environment.

“It’s a very close-knit place to come to school and and because of the smaller numbers if there are any children who are a bit hesitant, it’s a brilliant environment for them to come into,” she explained.

“It’s a lovely, relaxed atmosphere, very intimate and very creative. Through funding, we have had extra resources such as speech and language therapists coming in, play therapists, Relax Kids, yogalates, and another guy in doing hurling, football and camogie.

“There are a lot of resources for parents. If you don’t have Irish, there is help and support. We get books home and there’s CDs to go with them, to help with the pronunciation.”

Outside of school, a group of friends and neighbours have set up the group, An Chrannog, which organises different events, all through the medium of Irish.

This year, for the first time, they organised for an Irish speaking Santa, Daidí na Nollag, to meet the children.

Said Amie: “There are all these pathways and avenues that have opened up. There is tremendous work happening in the South Armagh area and the Naíscoil is a huge part of that growth and development in the Irish language.

“Where the Naíscoil is located, we are able to cater for the whole of south Armagh. We get children coming here from Forkhill, Mullaghbawn, Silverbridge, Cullyhanna and Crossmaglen.”

According to Irish medium body Comhairle na Gaelscolaíochta, the sector is now among the most successful sectors of education across the country, with a 70 per cent increase in enrolments over the 10 year period from 2011-2021.

It says research consistently finds that the immersion experience also enhances English language development and that children who are bilingual learn to read more rapidly than their monolingual peers.

With the admissions process for pre-school places opening on January 10 – and remaining open until January 27 – Amie would encourage parents to seriously consider Irish medium education for their children.

Anyone who would like to find our more or have a tour of the school is asked to send a message via the school’s Facebook page or telephone 028 3086 0556 between 8.30am – 3pm to arrange a visit.