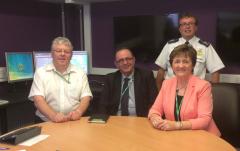 A First Responder’s scheme to provide urgent medical treatment to those in need is being established in Crossmaglen.

It will cover the south Armagh area and is in response to concerns over the length of time it can take for an ambulance to access rural parts.

The group will work closely with the Ambulance Service as it develops in the weeks and months ahead.

Community First Responder (CFR) volunteers are trained to attend emergency calls received by the ambulance service and provide care until the ambulance arrives.

Volunteers can arrive at an emergency scene in a matter of minutes, as they are sent to calls in their local area.

Having someone in the community who has been trained in first aid and can reach the patient quickly makes all the difference.

Several regions now have CFR units operating in their area with more seeking to establish this important role.

Now a new CFR is being set up in Crossmaglen.

SDLP representatives Dominic Bradley MLA and Councillor Geraldine Donnelly have met with senior representatives of the Northern Ireland Ambulance Service to discuss their concerns about response times across South Armagh.

Mr Bradley said: “Last year the Ambulance Service was called upon over 1100 times in South Armagh and our concern has been the length of time it takes for an ambulance to get to its destination.

“It takes a good 25 minutes to get to Crossmaglen from Newry and that’s on the basis that there is an ambulance there to respond; quite often vehicles are dispatched from Armagh, Dungannon, Craigavon or Killkeel and that all adds to the response times.

“All ‘Category A’ Calls are supposed to be responded to in eight minutes. This simply isn’t happening, it’s physically impossible.”

Councillor Geraldine Donnelly added: “The ironic thing is you never think about how long it takes for an ambulance to get to Crossmaglen, Cullyhanna or Forkhill until you’re in need of help.

“It can seem like a lifetime when you’re with a loved one who needs an ambulance urgently and yet it is not uncommon for it to take up to an hour for an ambulance to get to parts of South Armagh.

“We’re all too aware of the crises in our health service and the pressures on frontline services in Crossmaglen is also widely known, yet all too often it is the local GPs in South Armagh who respond to emergency calls because they too know how long it takes for an ambulance to arrive.

“Local people are in the process of establishing a ‘First Responder’s’ scheme in Crossmaglen, and whilst it is not designed to replace or substitute services such as the Ambulance Service, it is a vital service in this community and I commend all those who are involved in it and those who are volunteering as First Responders.

“They will work closely with the Ambulance Service as the service develops in the weeks and months ahead.

“Places like Crossmaglen are isolated from every service government has to offer, everything from health care to broadband, and yet this community has shown its resilience and has stepped up to the mark.

“With an ambulance base in Newry there is no way a vehicle can get to Crossmaglen within the eight minutes it is supposed to so the service the First Responders offer will save lives, of that there is no doubt.”