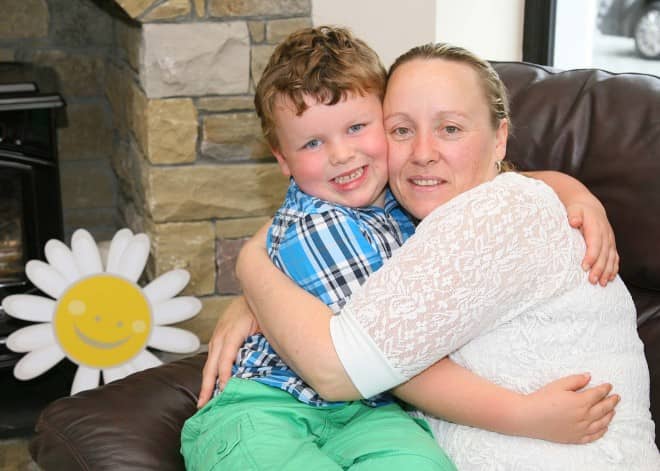 A South Armagh woman has opened up during Childhood Cancer Awareness Month (September) to share their emotional first-hand experience of the disease.

Michelle Grant, from Silverbridge, has joined forces with the Cancer Fund for Children to raise awareness of how the disease affects the whole family and what support is available.

Michelle’s little son Peter was diagnosed with cancer in 2012, when he was just five years old. She had made repeated trips to their GP with Peter about a lump growing out of the side of his eye, but it was only after a biopsy that it was confirmed as a cancerous tumour.

Peter required an operation and nine months of chemotherapy.

Michelle said the diagnosis and treatment really took its toll on the whole family.

“It was just such a shock, I can’t even put into words how we felt,” she said.

“Peter was violently sick as a result of the chemo and he had to be held down for it to be administered. It was awful seeing my child going through that. He used to ask ‘why are you doing this to me?’”

“Normal family life disappeared too. I spent a lot of time at the hospital with Peter. Our lives consisted of hospital food and sleepless nights.

“Peter’s older sister Alannah, who was 10, stayed at home with her dad or her granny. It was hard leaving her behind.

“When Peter was home I went into protective mode and battened down the hatches. Nobody was allowed in the house due to the risk of infection. Living on a farm and having a wee boy that just loves tractors and animals – this was very difficult.

“We were in a constant state of anxiety. One of the lowest points was Alannah’s confirmation. Peter was not allowed to attend and I remember just sitting in the church crying because he wasn’t there.”

But psychologically the effects of what happened are still with him.

“He hates going to the hospital even for a routine appointment,” added the devoted mum. “When he knows there is an upcoming hospital visit he is like a different child. There is always a fight about it. He won’t eat any of the food while he’s there as he associates it with a place that made him feel sick.”

Michelle explained how the Cancer Fund for Children’s support helped during this difficult time.

“We enjoyed a therapeutic short break and residential support which helped us relax and recharge,” she added.

“This gave us the chance to meet other families in a similar situation and chat to people who really understood what we were going through.

“Our Specialist, Lynn Wilson, was fantastic, and Alannah loved her one-to-one sessions. She felt a bit left out when Peter was ill, but the time spent with Lynn was ‘her time’. Lynn was someone she could talk to about anything. It helped her cope and feel included.”

Alannah added: “It gave me a chance just to talk to Lynn about anything that was worrying me and we did fun activities.”

Lynn, who has been working with the Grant family since Peter was diagnosed, is part of Cancer Fund for Children’s team of dedicated specialists, who are there to listen and help families cope with the impact cancer has on their lives.

Lynn explained further the benefits of one-to-one support: “Activities provided an opportunity for Alannah to talk about her experiences and to express her feelings and emotions while Peter was on treatment and while the family was isolated.

“The Grant family’s story illustrates how childhood cancer is not just a medical issue, but one that affects the whole family. Some issues families may face throughout a cancer journey include isolation, psychological problems and financial hardship.

“Cancer Fund for Children understands that long-term effects do not stop just because treatment is completed. Our specialist team offers dedicated one to one, sibling and bereavement support, as well as free therapeutic breaks to help rebuild a shattered family life.”

If you are affected by childhood cancer and need help or advice you can contact Cancer Fund for Children on 028 9080 5599.

The public can support Childhood Cancer Awareness Month by wearing a gold ribbon which can be purchased from Sainsbury’s Forestside branch, Ulster Bank, Progressive Building Society, A McLean Bookmakers, and Mount Charles canteens. You can also show your support and donate £3 by texting DAISY to 70555.