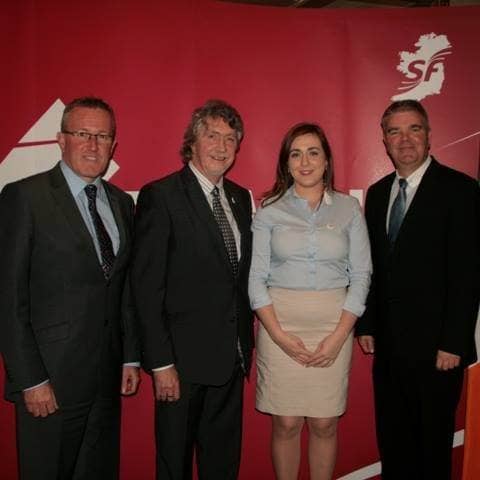 Newry and Armagh MP Conor Murphy will not be standing for Sinn Fein at the next Westminster election in May 2015.

His colleague, local Sinn Fein MLA Mickey Brady, has been chosen by the party to contest the seat, which has been held by Conor Murphy since 2005.

Meanwhile, Mr Murphy will be standing alongside current MLAs Cathal Boylan and Megan Fearon for the Northern Ireland Assembly elections in 2016.

The Camlough man is a former Minister for Regional Development and the party will be aiming to retain the three seats. Mickey Brady was selected for the Parliamentary poll at a recent Sinn Féin Party Constituency Convention held in Newry Golf Club.

The convention also endorsed the selections of Megan Fearon, Cathal Boylan and Conor Murphy to contest the Assembly elections the following year.

Commenting after his selection, Mr Brady said it was vital his party “stood firm against Tory plans to impose welfare cuts on the North”.

He said: “It’s a great honour and a privilege to be selected to contest the Newry and Armagh Westminster seat on behalf of Sinn Féin.

“It’s also a great privilege to be a member of the most vibrant and largest party on this island and standing this evening with the hardest party workers here in Newry and Armagh.

Mr Brady said that, if elected by the people of Newry and Armagh, he would continue to champion the interests of all of the people of the area and in particular the most vulnerable in the pursuit of job creation, youth opportunities, tourism development, Daisy Hill Hospital services and sustainability and the development of the infrastructure in both Armagh and Newry cities.

“We have a wealth of talent, elected and non-elected, and what is required is that we harness all of those skills and political influence to achieve economic and social prosperity for this constituency,” he said.

“Unity of purpose and the building of a better life and opportunity for all should be the goals of all of us who live here.

“Here in Newry and Armagh Republicans do not take the electorate for granted. However make no mistake. We can stand before the electorate in this constituency with confidence because we have delivered on past promises. Retaining the seat simply isn’t enough. In order to move matters forward we have to win in resounding fashion. We have to do what it takes to win every possible vote and that work must start immediately.”

Megan Fearon MLA, who along with her colleagues Cathal Boylan MLA and Conor Murphy MP was selected to contest the Assembly Elections in 2016, said she was delighted to be part of a vibrant, experienced and committed Sinn Féin team of elected representatives in the Newry and Armagh Constituency.

She said: “Our local councillors and activists are recogonised as hard working people who care about the communities they belong to. I am proud to currently be part of that Sinn Féin team.

“We believe that many of our economic, infrastructural, tourism and social economy deficits – particularly in this area – emanate from the political divisions of the past. And while the Peace Process hasn’t totally eradicated discrimination against areas like South Armagh, we have to be vigilant as we work to deliver a better future for all.”

Her Newry and Armagh MLA colleague Cathal Boylan told the large attendance at the recent convention: “Our councillors, MLAs, the MP’s office and our activists have worked to change the landscape of Newry and Armagh over many years and we like no one else will continue to do so as there is a lot more to do.

“It is up to all of us between now and Election Day to make sure that not a single voter is left in any doubt as to what we have done in this constituency on their behalf. We will challenge political opponents who might be critical of aspects of our work to explain how they would have done things differently. Nobody gets off the hook. We are after every vote.”

Current Newry and Armagh MP Conor Murphy, who will now contest the Assembly 2016 elections, gave all present at the Sinn Féin Convention an update on the ongoing talks at Stormont, where he is a key member of his party’s talks team.

He said Sinn Fein had consistently called on both governments to live up to their role as co-equal guarantors of these agreements.

Mr Murphy added: “Given the undermining of the institutions, the refusal to engage in talks and the breaches of the Good Friday Agreement (GFA) and other agreements by sections of political unionism and the British government, Sinn Féin has consistently called on both governments to live up to their role as co-equal guarantors of these agreements. We remain concerned that the British Government has assumed an explicitly partisan and pro-unionist party stance. Sinn Féin have entered these talks to resolve issues and will, as always, abide by any agreements made. Others must commit to do the same.”

Concluding, he said that Sinn Féin would continue to demand a border poll.

“Our party will continue to demand a border poll to put the case for Irish unity and independence to the electorate,” Mr Murphy said.

“It’s a debate we can win and it’s clear that our enemies fear us putting our case about the benefits of Irish unity to the people. Stability and equality are today the foremost threats to Britain’s claim to this part of Ireland; stability, because it will remove all of the distractions that prevent people from focussing on the issues that matter, equality, because it attacks the discriminatory culture that held this state together.”