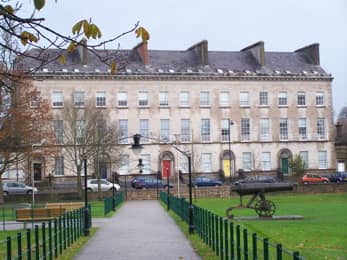 Twelve years after the Review of Public Administration was first launched, the Southern Education and Library Board in Armagh looks set to go.

The SELB, one of the area’s biggest employers, together with the North’s four other education and library boards, are to be replaced with a single body.

In 2002, RPA was first mooted and the then Secretary of State brought forward the final proposals in 2005.

It involved replacing the five boards with a single Education and Skills Authority, although that was something which never found full favour.

The boards as they were were streamlined, and now, all these years later, the Northern Ireland Executive has reached agreement, that legislation should be brought forward to create a single body to replace the five boards.

Of course the fear here locally will be that the single governing body would sit in Belfast, or elsewhere in the Province, and the educational base lost to Armagh.

The education thread is essentially the last strand to knit in the overall RPA strategy, designed and developed to save millions of pounds annually by shedding senior posts in what is seen as a top heavy administration  in the North.

It is also being done now to coincide with the reduction of 26 local authorities here to just 11, which currently exist in shadow form and will come into full effect at the start of April next year.

With the emergence of the new ‘super-councils’ in less than seven months, the momentum now is to get education streamlined on the same vein with a workable administration, given the failed ESA plans.

Education Minister John O’Dowd today (Tuesday) welcomed the Executive’s agreement that legislation should be brought forward to create a single body to replace the five boards and their Staff Commission.

Speaking after the Executive meeting, Mr O’Dowd said: “Had it been possible to secure agreement on the Education Bill, then the Education and Skills Authority (ESA) would have been in place for April 2015.

“However, despite my best efforts, that agreement was not forthcoming. In these circumstances, the Executive has agreed to withdraw its current commitment to establish ESA.

“In April 2015, as part of the local government reform, previously known as the Review of Public Administration, the number of councils in Northern Ireland will decrease from 26 to 11 and there will also be a restructuring of health and education authorities.

“The Education and Skills Authority (ESA) was due to replace the five education and library boards. However, it failed to get political agreement.

“I now have the Executive’s agreement for my Department to begin work on legislation to replace the existing five Education and Library Boards with a single body.

“The new body will assume the responsibilities of the ELBs as they currently exist, including employer responsibilities. The proposed Bill will also include a provision for my Department to fund a new body to provide support for controlled schools.”

Mr O’Dowd said there was “no ‘do-nothing’ option”.

The Minister added: “This is the best way of providing an education administration that is compatible with the changes to district councils that take full effect on 1 April 2015.

“It will provide stability in our education system and ensure consistency in services. Further delay will damage the ability of Boards to deliver a modern education service.

“A single board will also have much of the strength of the business case made for ESA, which promised £185 million savings over 10 years.”