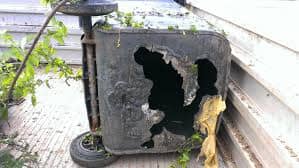 Residents living beside an underpass at Friary Road in Armagh are still being tortured on a weekly basis by anti-social behaviour.

In addition, a local salt bin, an essential resource during spells of freezing weather in recent weeks, was also targeted.

Police in Armagh are appealing for witnesses in relation to these latest incidents.

“There is an ongoing problem of anti-social behaviour in this area which is affecting all the local residents,” said a PSNI spokesperson.

The problem is something which has existed in the area for years and there have been concerted efforts to try and address it, as Armagh I has previously reported.

The underpass beneath the Killylea Road has been a magnet for underage drinking and anti-social behaviour for many years.

And last August we reported that there were moves to have it ‘alley-gated’ and closed off to the public.

Regional Development Minister Danny Kennedy had then signalled a fresh impetus to get something done after meeting on site with Newry and Armagh Sinn Fein MLA Cathal Boylan and City Councillors Cathy Rafferty and Roy McCartney.

They described the meeting last summer as “very positive” and hoped that such a barrier would protect residents and their properties.

Known locally as the ‘Tunnel’, the delegation say the location is renowned for young people gathering to drink carry-outs, light fires and generally cause annoyance, fear and intimidation for the local residents, many of whom are elderly or have young children.

In one incident shortly before that meeting, residents at Nialls Crescent had to be evacuated after a shed caught on fire. And the burning and vandalism was not confined to underground. Fencing erected was placed across the Killylea Road last June and an attempt made to block traffic by burning tyres.