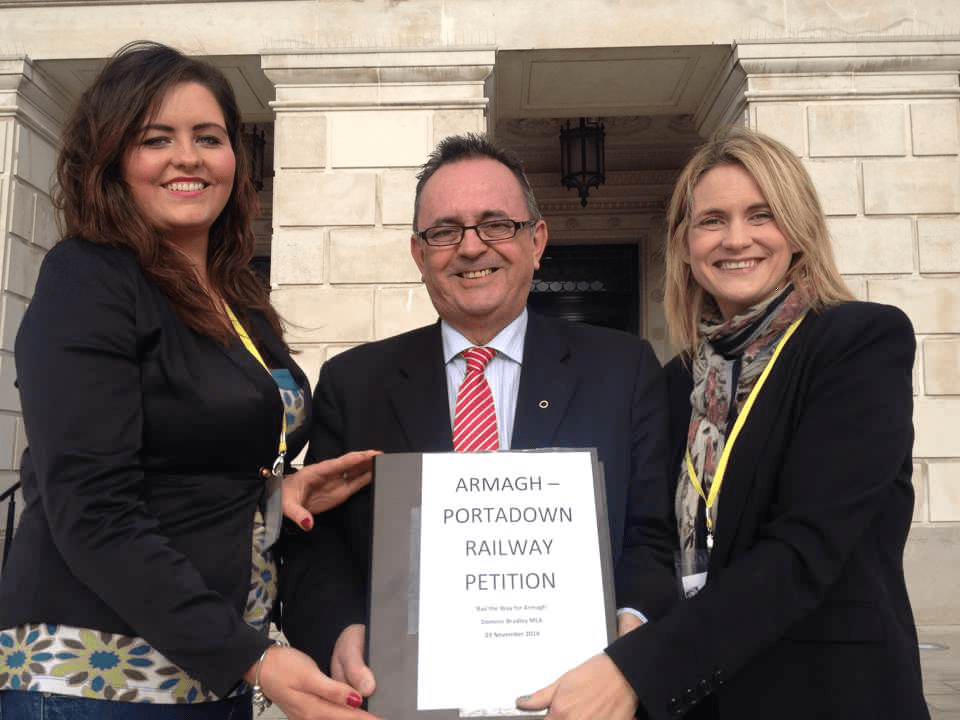 Ten thousand people who signed a petition calling for the restoration of a rail link between Armagh and Portadown have had their demands lodged at Stormont today, Monday.

Newry and Armagh SDLP Assemblyman Dominic Bradley handed over the petition, which was co-ordinated by Armagh campaigner Suzan McComb.

As she travelled to Stormont for the formal handing over, Suzan said she was “overwhelmed” by the support within the local community.

In September, Armagh I reported that Armagh City and District Council was considering employing consultants to help the campaign for the rail link.

Transport Minister Danny Kennedy has previously expressed his desire to see the reopening of the line, but he has always insisted that will depend – obviously – on funding.

Armagh Council wanted to employ consultants to work in partnership with Transport NI and Minister Kennedy, a boost to local campaigners who have worked relentlessly to try and get the Armagh-Portadown rail link reopened.

Suzan McComb, who has spent many months gathering signatures on the petition, believes Armagh should not be deprived of a rail link, something which many other areas take for granted.

“Many people from Armagh commute to places like Belfast and Dublin on a daily basis for work and want to be able to make their journey on public transport,” she said. “Our bus service is completely inadequate. It is no substitute for a rail link.

“I started off the petition thinking we could get a couple of hundred signatures, but to have almost 10,000 people support the call is a very strong message to our politicians at Stormont.

“People see governments across the world invest in rail infrastructure and cannot understand why there has been no such investment here in decades and, if we are serious about protecting our environment, then what better way to do that than take thousands of cars off our roads by investing in and expanding our rail network?

“I am delighted we have lodged this petition at Stormont , at the heart of government in Northern Ireland.

“Dominic Bradley and local Councillor Mealla Campbell have been instrumental in this campaign and I am delighted Dominic could facilitate this petition at Stormont.”

Mr Bradley said he was delighted to lodge the petition of 10,000 signatures with the Office of the Speaker from the people of Armagh demanding that a rail link between Armagh and Portadown is reestablished.

“Armagh is an historic city and yet it is the only city in Europe not to have a rail link and we want to see this changed.

“Despite being an historic city, Armagh has never enjoyed the much needed road and rail infrastructure that it really needs and many believe it has suffered economically because of the lack of that infrastructure.

” The last rail link between Portadown and Armagh closed in the 1950s.

“In January 2013, the Department of Regional Development launched a consultation exercise on the future of the railways across Northern Ireland and this started a very lively debate in the local community in Armagh.

“For many years there has always been a desire in the local community to see the railway extended beyond Portadown to Armagh and the community seized the opportunity to make their voices heard.”

“It can unlock the economic potential Armagh has and at the same time help protect our environment,” she commented.

“We want to see the rail link extended from Portadown to Armagh, but it cannot stop there. We want to see an expansion of the all-Ireland rail network and Armagh can be a central hub in that development.”