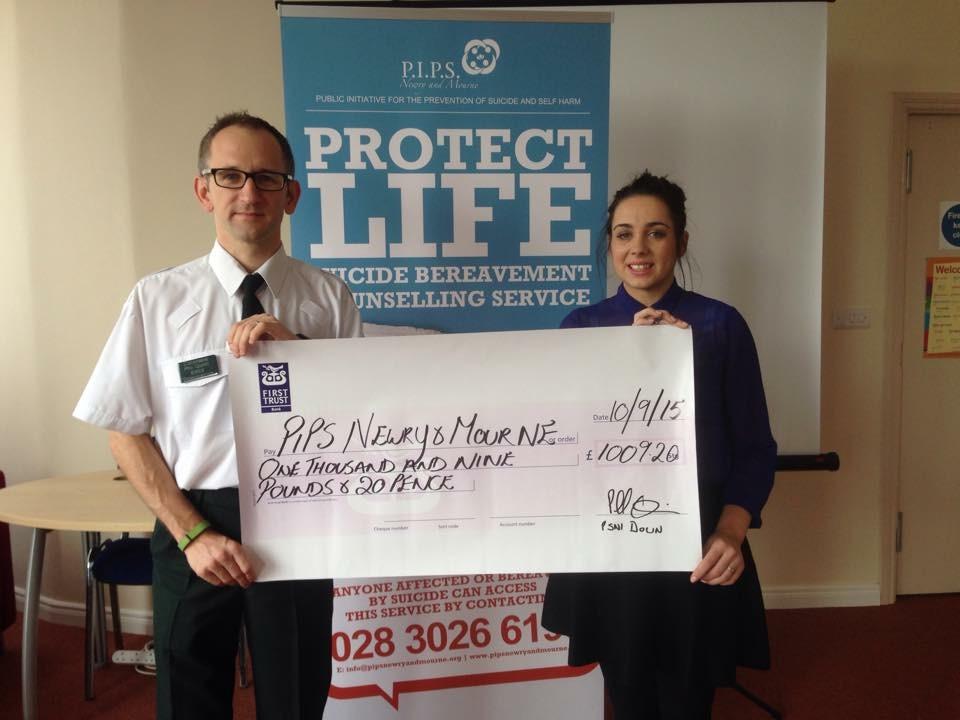 A local police officer has undertaken a 16,000 ft skydive to raise money for a local suicide awareness charity.

And he visited the Newry and Mourne office of PIPS to present the proceeds – more than double his target – on World Suicide Awareness Day this week.

Down PSNI Officer, Constable Phil Quinn, had taken to the skies to raise money for PIPS, having decided he wanted to give something back to the communities he serves. A  few months ago shared his proposal on Down PSNI Facebook Page.

Con Quinn said: “I wanted to raise money for charity but wasn’t sure what I could do so I asked our followers on Down PSNI Facebook for their suggestions. There were lots of fun and crazy suggestions and together we came up with ‘PigsMightFly’”.

A sky dive was selected as the chosen charity activity and while it was named with tongue very firmly in cheek the intention couldn’t have been more serious. The aim was to raise at least £500 for PIPS Suicide Prevention.

PIPS Newry and Mourne was established in 2003 by people who had experienced suicide in their families. The organisation aims to help save lives, support those affected by suicide and self-harm and provide suicide prevention training and education workshops. Con Quinn explained: “As a police officer I have seen, first hand, the despair and anguish that people go through because of suicide. It doesn’t matter if you are a sufferer, family, friend or support service, the effects are devastating. It seemed right to support this charity which provides vital support to so many.”

Con Quinn completed a 16,000ft tandem jump at an airfield near Garvagh last Saturday, September 5 and raised a massive £1009.26.

He visited the PIPS office in Newry on World Suicide Prevention Day to present a cheque. “I would like to thank each and every person who supported me and donated money,” added Con Quinn.

“It was an amazing experience and great that police and community came together to show their appreciation of the work carried out by PIPS.”