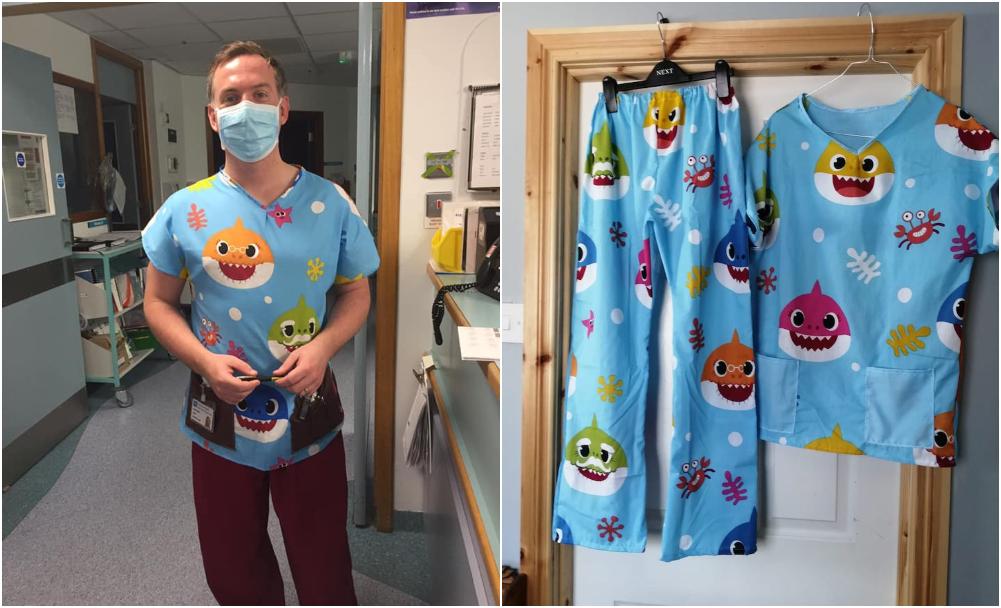 A Portadown woman, who has worked in the town’s Tesco store at The Meadows for almost 16 years, has temporarily swapped her role in retail to create much-needed scrubs for local health care workers.

With many of the scrubs being used in children’s wards Valerie felt these quirky, child-friendly prints would help put a smile on the faces of young patients and health workers alike.

Fully supported by Tesco in her new endeavour, Valerie now makes between 15-20 scrubs each day.

Donations have also been flowing in from supportive shoppers who have been keen to help by gifting new bedsheets which can be used to create the scrubs.

Commenting on her busy sewing schedule, Valerie said she was keen to help in any way possible.

“We’re part of a tight-knit community here in Portadown and when I heard about the need for scrubs I wanted to do my bit along with many other sewing groups who are doing similar work,” she said. Valerie Kelly (right) with members of the NI Ambulance Service

“I’ve always had an interest in sewing and dress making but never done anything to this scale and don’t think my sewing machine has worked this hard in years!

“The support and encouragement I’ve had from the team at Tesco and many of our regular customers has been fantastic and allowed me to focus on making as many scrubs as possible.”

In addition to the scrubs, Valerie is now also making washable ‘kit bags’ for volunteers from St John Ambulance volunteers, which can be used to place worn uniforms into before volunteers return home, allowing them to place all items directly into their washing machine and therefore reducing the risk of infection. Speaking about Valerie’s impressive achievement, Jonny Craig, manager at Tesco, The Meadows, said: “We’re all so proud of what Valerie has been doing to help the many healthcare workers locally and across Northern Ireland and we’re pleased to be able to support her as she swaps her work in our store to take up another essential role at her sewing machine.

“We’ve also been overwhelmed by the support from customers who have donated new bedsheets for Valerie to use – it’s fantastic to see everyone coming together in the community.”