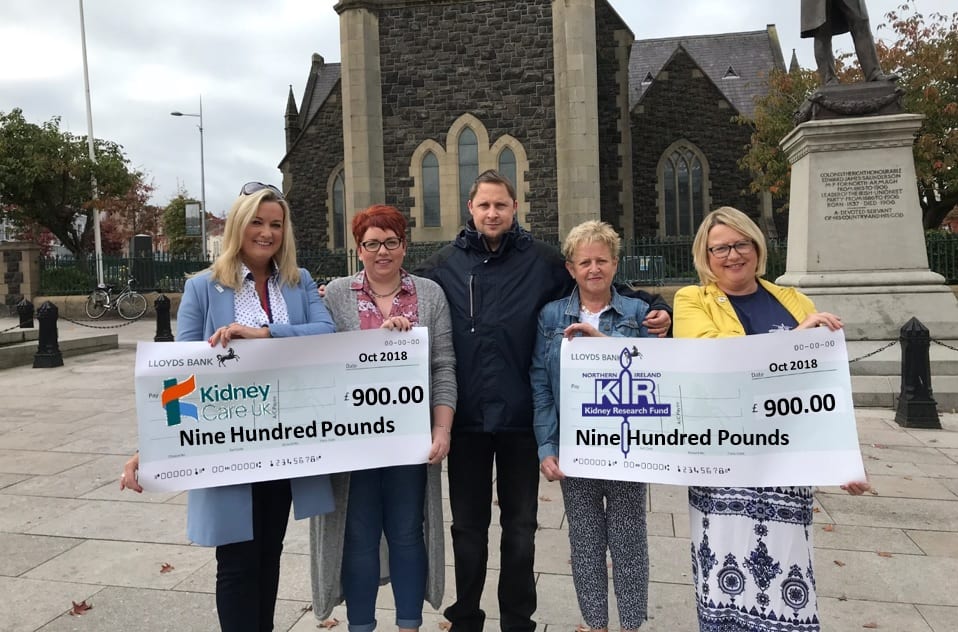 A Portadown man – who underwent a kidney transplant in January – has boosted two local charities after a special fundraiser to help others.

Keith, who received a kidney transplant from his sister Paula in January, and his wife Kathryn were assisted by Keith’s mum Anne Hayes and Noell Crawford and supported by an army of people from across the local area who rallied to their cause.

The funds were presented recently to charity representatives from Kidney Care UK and from the Northern Ireland Kidney Research Fund, who both work to support local kidney patients and advance research into kidney disease.

Praising Keith, Kathryn and their family Northern Ireland Ambassador for Kidney Care UK Jo-Anne Dobson said: “I first got the opportunity to meet with Keith and Kathryn when they were in the Transplant Unit on the eleventh floor of Belfast City Hospital just after Keith received the miracle of a kidney transplant from his sister Paula.

“Now many months on and to see Keith looking so well is absolutely amazing but to have them working hard as a family to fundraise and support Keith’s fellow kidney patients through my charity Kidney Care UK and also the Northern Ireland Kidney Research Fund is truly magnificent.

“What could be more touching than a family who know the love which comes from a live kidney transplant helping other families across Northern Ireland?

“On behalf of Kidney Care UK I thank them all from the bottom of my heart for their hard work and efforts to rally the people of Portadown to support a cause which touches the lives of so many.

“I also extend a special mention to the businesses and families across the local area who got behind the Anderson family to help support and enable them to raise such a magnificent sum.”

“It’s always nice for kidney patients to organise and fundraise to help support research into kidney disease at the Belfast City Hospital.

“I want to say a special word of thanks to the Anderson family – and especially Keith and Kathryn – for going that extra mile to help others in a similar situation to them. Well done!”

The Anderson family would like to send a public and heartfelt thank you to the Royal British Legion and all of the local businesses who supported their cause. They included Judith Boyd, Shelbourne Motors, Joanne Silcock, Patterson’s Oil, Christie Adamson, Judith Courtney, Sitara Morgan, Head of the Road, Loughgall Road Spar, Ellie Mo’s, Euro Spar, Tesco, Hair Culture and Castle Hardware.

A final word of thanks goes to the group ‘Back to Black’ for providing the fantastic entertainment on the evening and also to Anne’s Husband Trevor for enabling this to happen.