Willie Frazer hits out at 'dirtbags' after 'have you found your daddy yet?' bonfire taunt 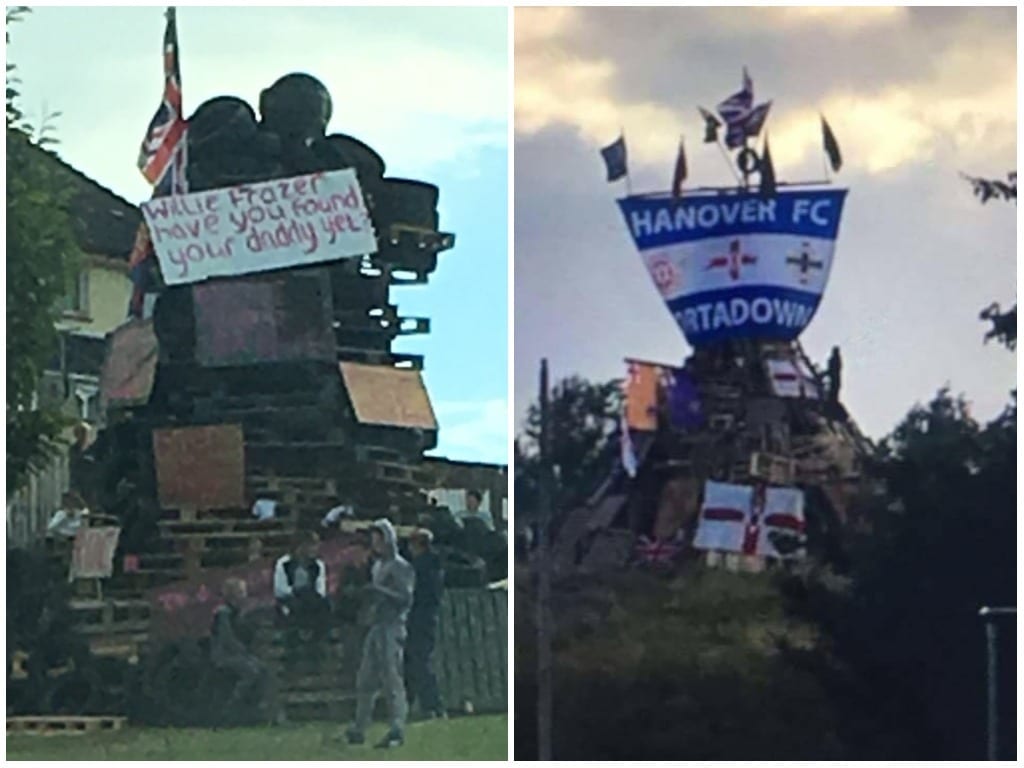 Sinn Fein has condemned the burning of flags and other emblems on bonfires on Wednesday night, saying those responsible were “not acting in the name of republicanism”.

In Newry, a bonfire had a placard with the words ‘Willie Frazer have you found your daddy yet? written across it, placed at the top, alongside a Union flag.

The home-made poster was a reference to part-time UDR member Bertie Frazer, the father of the Markethill man and victims’ campaigner, who was shot dead by the IRA in August 1975.

In Portadown, Red Hand and Union flags were also placed on a bonfire, alongside a banner bearing the name of Hanover FC, and badges, including that of the Northern Ireland football team.

He said: “The burning of symbols of a football club and flags which are important to the unionist community is wrong and a hate crime.”

Newry and Armagh Sinn Fein MP Mickey Brady also condemned those sentiments and hit out at those responsible for the burning of other similar items on the fire at Newry.

He said: “Sinn Fein condemns the burning of flags, emblems, effigies and posters on bonfires.

“Such actions are hate crimes and must be eradicated.

“This so called anti-internment bonfire has nothing whatsoever to do with the legacy of internment.

“It is anti-republican, and does not celebrate any aspect of Irish national identity or cultural traditions.

“Those responsible are under no circumstances acting in the name of republicanism.”

Mr Frazer, meanwhile, shared a video on social media and branded those behind placing the placard bearing his late father’s name as “dirtbags”.

He said his car also came under attack from stones and bottles being thrown when he stopped to take a photograph of the bonfire.

Ulster Unionist Councillor David Taylor also hit out at the organisers of the internment bonfire erected at Parkhead in Newry.

Councillor Taylor said: “A multitude of hate crimes have been committed by the organisers of an internment bonfire erected at Parkhead, Newry and they should be roundly condemned for their sickening actions.

“Items placed on the bonfire reference victims’ campaigner William Frazer and his late father Bertie Frazer, who was murdered by the IRA. Other items direct highly offensive remarks towards HM The Queen and the RUC.

“The Frazer family have suffered greatly at the evil hands of Republicanism terrorism and it is completely unacceptable that they should have to tolerate this despicable behaviour.

“These actions highlight that a sinister and threatening mindset continues to prevail within Republicanism and the bonfire organisers should be roundly condemned across the political spectrum.

“I have reported this matter to the PSNI.”

Upper Bann SDLP MLA Dolores Kelly added: “Absolutely disgraceful and unacceptable behaviour, burning flags and other symbols including those of a football club can only be described as a hate crime. Those responsible have little to offer society.”

The Lord Mayor, councillor Julie Flaherty, has called for the Hanover FC flag returned to the club in a bid to help restore community relations.

Councillor Flaherty said: “A great deal of hurt has been caused by the placing of a flag belonging to Portadown club Hanover FC on an anti-internment bonfire in Craigavon.

“This particular flag was taken to France when the club travelled to support Northern Ireland at the Euros in 2016 and represents precious memories for Hanover FC, so the club is understandably angry at its theft and placing on this bonfire.

“The people responsible are quite clearly trying to heighten tensions and cause offence, which helps absolutely nobody.

“I would appeal to anyone with influence to do all they can to have this flag removed and returned to Hanover FC. Such a gesture would be hugely appreciated and help improve community relations.”

“Once again Republicans in Newry have stooped to a new low in mocking the callous and brutal murder of an innocent man who was simply going about his daily business earning a living for his family and trying to do the best for the whole community,” said Mr Irwin.

“This is not the first time this has happened in this area and speaks volumes about the type of depraved people organising this Republican bonfire at Parkhead in Newry.

“Following on from the desecration of the poppy wreaths at the Cenotaph in Newry and Narrow Water and the recent attack on the Kingsmill Memorial it’s clear that a section of the Newry community are hell bent on
creating as much tension as possible and injecting as much hate and bile into the area as they can
possibly muster.

“This sick and mindless placard mocking William Frazer and his family must be condemned from all quarters and promptly investigated for what it is – a sickening hate crime which does nothing but create further tension in the community. Talk of equality and rights by Republicans around Newry is lost on their Unionist neighbours who have recently witnessed attack after attack in this area.

“I have spoken with William Frazer and assured him of my full support at this difficult time. His relentless pursuit of justice for innocent victims is obviously hurting some Republicans who feel they
must retaliate in the most vile manner possible.”