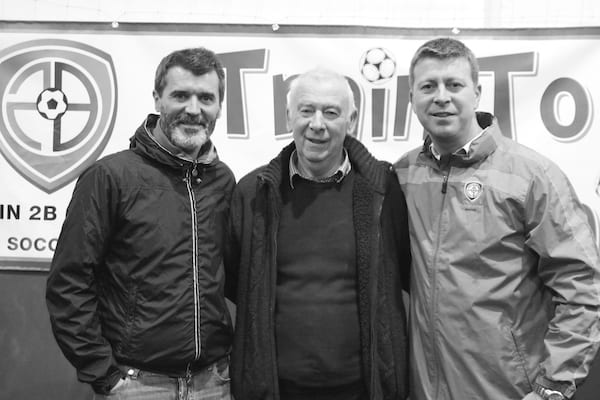 The Prime Minister has recognised Pat McGibbon, from Lurgan, for his exceptional voluntary service founding ‘Train To Be Smart’.

He was inspired to establish the ‘Train To Be Smart’ charitable centre in memory of his brother Phillip, who took his own life eight months after Pat moved to Old Trafford to play for Manchester United in 1993.

tarting with just 26 young people in 2013, the charity has since grown to support 200 living in deprived areas in Northern Ireland, using sport to promote positive mental health and wellbeing.

Receiving support from leading figures from football, including Sir Alex Ferguson and former Irish international player Roy Keane, the centre is open to children of all ages, abilities and needs.

Pat is the latest recipient of the Points of Light award, which recognises outstanding volunteers who are making a change in their community and inspiring others.

Each day, someone, somewhere in the country is selected to receive the award to celebrate their remarkable achievements.

In a personal letter to Pat, Prime Minister Theresa May said: “You have shown remarkable courage and strength in responding to the personal tragedy of losing your brother Phillip by speaking out publicly on the importance of mental health.

“You should feel enormously proud of how your football coaching programmes are helping hundreds of young people in Northern Ireland to improve their mental wellbeing.”

Pat said: “I’m privileged to receive this volunteering award. I see first-hand each day the valuable efforts of our own volunteers at ‘Train 2B SMART’ and in the area of promoting positive mental health, volunteers play a hugely valuable role in giving back to local and wider community.”

Over 6,000 Points of Light have been awarded in the USA, and former Presidents have publicly supported the partnership with Points of Light UK. There is a similar cross-party approach to the UK programme and MPs from different parties often present their constituents with their Points of Light awards.

Regardless of whether it’s a doctor restoring local monuments in her free time, a father teaching young people life skills, or a local musician giving a voice to lonely people, the Points of Light award honours shining examples of volunteering across the UK.