The proposals also indicate a substantial new restaurant for public use, while a gym, ground floor parking and private balconies will benefit residents in the new apartments 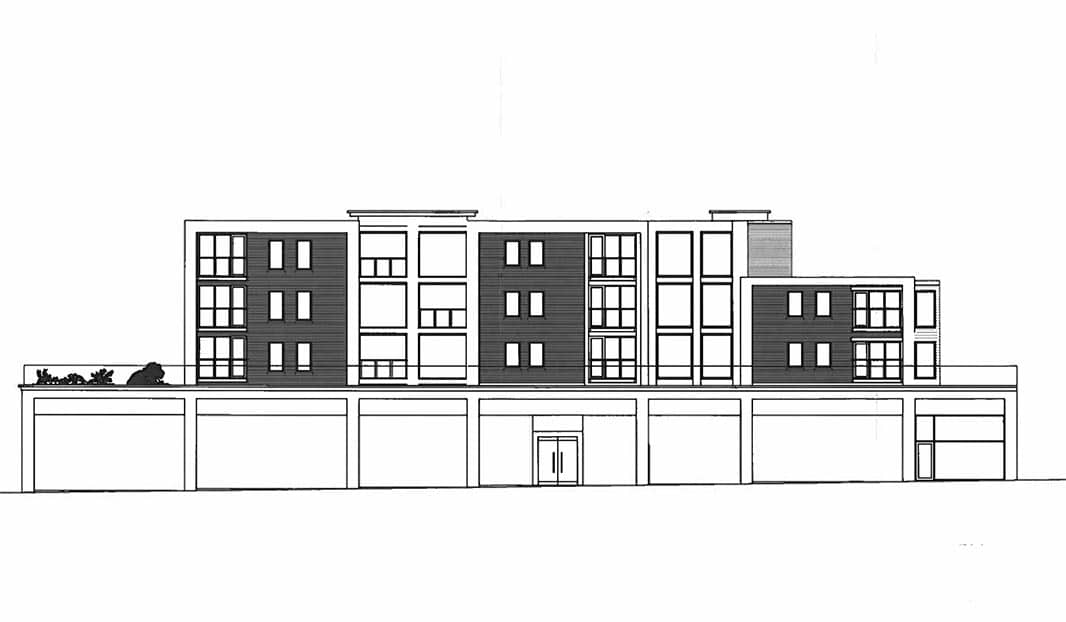 Outline planning approval looks to be granted for a new four-storey, multi-million pound shops and apartments development in the heart of Portadown.

The ambitious proposals – at Shillington Street in the town – would comprise of five shop units of varying sizes at ground floor level.

In addition, the proposals also indicate the inclusion of a substantial new restaurant outlet.

There would be service yards and a communal lobby and office space to the rear of the retail units.

And over the floors above – and in a separate block behind – would be constructed 47 apartments.

A total of 27 of these will be located over three storeys above the retail units, made up of 25 two-bedroom properties and two one-bedroom apartments.

The remaining 20 – all two-bedroom – will be constructed in a separate development to the rear, with parking at ground floor level and three-storeys of apartments above.

There will be a communal roof terrace at first floor level to provide ‘amenity space’ for residents. And each of the new apartments will also benefit from the inclusion of its own private balcony.

The plans would also allow for the provision of a gym within the overall residential components.

The submission states that there will be 74 parking spaces for the tenants of the new apartments, and retail staff and customers will be able to make use of the existing public car park at the front of the complex.

Papers submitted with the original proposals indicate that while the site is at Shillington Street and within Portadown’s town centre it “does not form part of the town’s main shopping thoroughfare”.

It points to Portadown already having three shopping centres – High Street Mall, the Meadows and Magowan West – but says this development will have the “potential to act as a catalyst to the wider regeneration of the area and as such should be welcomed”.

It says the site at present is currently occupied by a “mix of poor quality buildings” ranging from one to three storeys. It says the main occupant is Furnitureland, while others include a hair salon, printing works, Portadown Gas and office accommodation for a development company.

The submission reveals the goal is to “demolish the existing property and to redevelop the site with mixed use of both retail and residential”.

“It is anticipated that existing tenants will occupy some of the proposed retail space,” adds a concept statement.

And it points to the benefits it will bring economically, as it continues: “The proposal will allow a choice of living within close proximity to all amenities, transport links and places of employment.

“The proposal with the retail element will maintain existing retail employment with the possibility of additional employment.

“In addition, the proposal introduces a residential element which will be an employment generator in terms of cleaning and staffing facilities proposed such as the gym.”

An application for outline approval was submitted by BK Properties back in 2018 and has been under consideration since that time.

Now planners are to recommend that this be granted and that is the opinion which will go to the September meeting of Armagh City, Banbridge and Craigavon Borough Council’s planning committee.

If councillors endorse that opinion, it will pave the way for the developer to bring back more concrete proposals and submit an application for full approval to take the project from paper to plaster and completely transform this part of Portadown town centre.