On a more serious note, 160 bags of rubbish has been collected along one stretch of the Northway 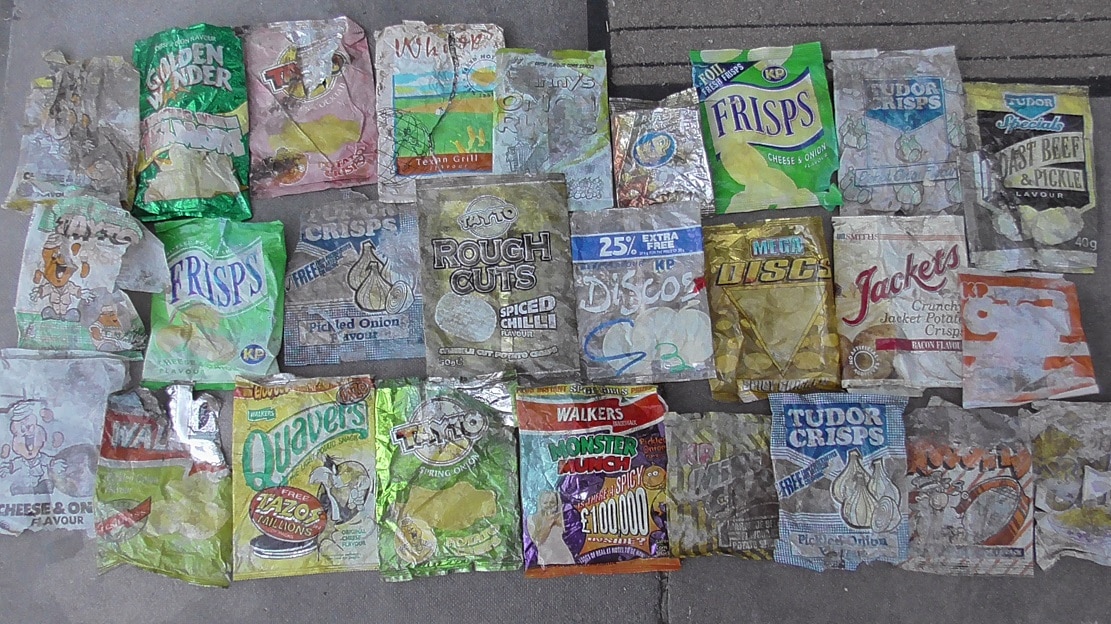 A volunteer who has been cleaning up a stretch of the Northway in Portadown has built up quite a collection of old crisp packets, and is appealing for help in trying to identify the oldest.

Hubert Giraudeau, one of a team of helpers who have been clearing the grass verge between Armagh Road and Corcrain Road, says a large number of the packets predate the year 2000.

They include brand names such as Tudor, which ceased production in 2003, while the oldest date visible is February 1984, making the packet 37 years old.

However, there are some bags which have codes instead of dates, so Hubert cannot work out what age they are.

The retired Frenchman, who lives close to the Northway,  is a volunteer with Live Here Love Here ( (Keep Northern Ireland Beautiful), who has won an award for his work.

He said: “There is a Walkers packet from 1997 with Baby Spice on it and I found one yesterday with early Simpsons on  it. There have been other cartoon characters too like Tweetie Pie.”

On a more serious note, the team has collected 160 bags of litter in about two months and that doesn’t include large items which won’t fit into the bags.

The rubbish has included carpets, bicycles, scooters, wheels, pots and pans, cushions and numerous other items.

Hubert says the crisp packets also highlight the “massive” issue of plastic and how long it takes to decompose.

“So many bags of crisps are consumed in the UK and they are not just going to disappear,” he said. “Some of the bags we found look like they were produced yesterday.”

The issue was highlighted in The Independent newspaper in 2018 when environmental campaigners pointed to the discovery of a 30-year-old bag of Walkers Crisps as proof of the growing problem of plastic pollution in the oceans.

Hubert, who posts up short videos/slide shows on Facebook at Greencycling and Greenthinking Hubert, is planning to keep the crisp bags and use them in educational displays for schools to raise awareness.

He can be contacted via email at hubertgiraudeau@hotmail.com