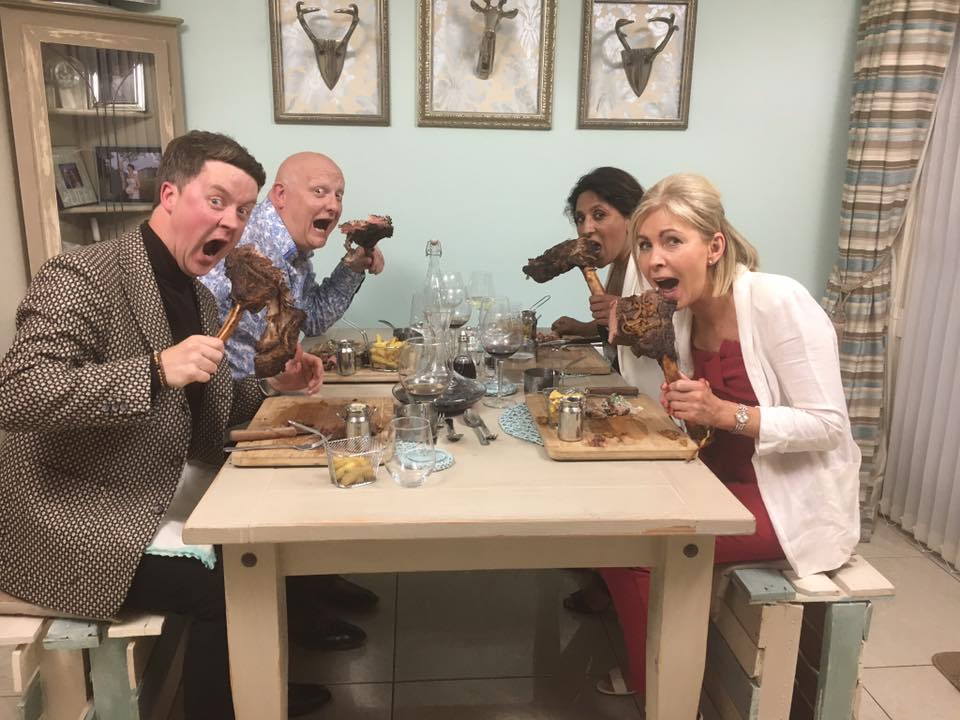 A county Armagh man has told viewers to expect fireworks when he appears on their television screens later this month.

Owen Matchett from Portadown ‘stars’ in an episode of Channel 4’s hit TV show Come Dine With Me.

The gregarious 44-year-old estate agent director says appearing on the show was so much fun, but has remained tight-lipped on whether or not he walked away with the £1,000 prize pot.

Owen, along with three other amateur chefs from across Northern Ireland: Dundonald; Belfast; and Ballyclare, hosted dinner parties as they battled it out over four days of intense filming.

It all began as a bit of a light-hearted joke said Owen, one of Portadown’s brightest characters.

Speaking to Armagh I, Owen said the process started at the beginning of the year.

“I was in work when my wife sent me a Facebook message to say they were looking contestants and I thought ‘why the hell not,” he recalls.

“About a month later I got a phone-call from Come Dine With Me in London. They interviewed me over the phone for half an hour and they they said usually ‘these conversations last five minutes and we’re on the phone to you half an hour so you sound like the type of fella we’d want to do a casting for’.

“So the following week a film crew and researcher came over from London and stayed with me for a few hours for the casting.

“Basically they just asked what type of person I was, what sort of contestant I would be, would I be a straight-talker; they wanted to know more about my character, they were basically profiling me.

“They told me I’d hear back in a month, and lo and behold, one month later I got a phone call from London saying I had been accepted on to the show with filming taking place the following week.”

It was all hands to the pump for Owen; it was his time to shine and he wasn’t about to shirk a challenge with a main course nobody expected.

“I had to send through the menu I had chosen and my main course, the producers said they had said they never seen anything like that on the show before.”

The four days of filming lasted morning until night but Owen said it was “an absolute laugh”.

“They would pick you up in a taxi at your house and take you to your destination, exactly like you see on the show. You did the menu readings that morning for the place you were going to that night.

“It was a total laugh-a-second, really good fun. I decided to play the pantomime villain a bit so I would wind people up the whole week but it was all a good bit of Northern Irish banter, so it was.”

And playing the villain wasn’t to everyone’s liking as Owen explains.

“We all got on very well apart from one person who I ended up having an argument with, so that was very funny.

“But I can truthfully say it was plain-sailing for me, the conversation flowed. There was a bit of tension on the last night between myself and another contestant, where there were some fireworks should we say. That was the only time personalities really clashed.

“Reassured this will not be a dull TV show, definitely not, no way. The other contestants really hit it off and had an absolute laugh.”

Catch Owen’s episode on Channel 4 at 5pm on Wednesday, September 27.