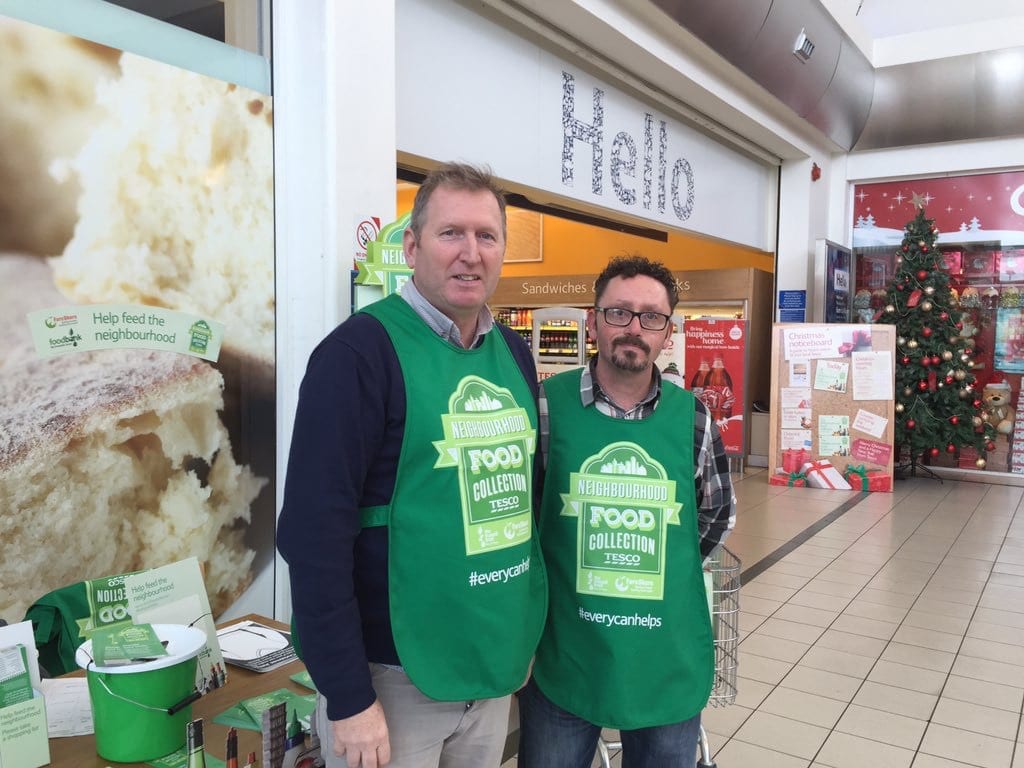 What do you think when you hear the word ‘Foodbank’?

Does it conjure up the image of work-shy individuals queuing to get whatever they can for free. Maybe you automatically think of endless lines of social and economic migrants feeding off state hand-outs and the goodwill of the local population. If you think either you would be wrong.

I recently accepted an invitation from Patrick Loughead, a local Foodbank volunteer, to help collect food at a Tesco in Portadown. I found the experience difficult; difficult because it didn’t feel natural to stand outside Tesco and ask the general public to donate tins of beans, soup, pasta and other none perishable goods. If it was difficult for me then I can imagine how difficult it might be for members of the public to stop and place food into a large basket as a donation. Giving money to charity is so much a part of our social makeup but to be asked to donate food instead does feel unnatural to most, including me.

“These are proud individuals who don’t want to be there, who don’t

want to ask for hand-outs but have now exhausted all other options.”

Yet if we feel uncomfortable about donating food just spare a thought for those who find themselves in a position where they need these donations. The vast majority of those who need to use Foodbanks are in some kind of financial crises; that may be because they are low paid, work zero hour contracts, have some kind of benefit suspension or indeed are waiting a decision on benefits. These issues affect all corners of society from the working class living life from hand to mouth to those who might be viewed ‘well off’ but an overwhelming financial crises has left them struggling.  Of course this also include economic migrants who came to this country looking for a better life only to find the streets are not always paved with gold; they are in no less need of help, the argument of whether they should be here or not is a different one. I have watched as they come into the Foodbank just above Chimes Restaurant on Portadown’s High Street.  They have a look of abandonment, embarrassment and even shame which the staff quickly try to dispel by offering them a cup of tea. These are proud individuals who don’t want to be there, who don’t want to ask for hand-outs but have now exhausted all other options. They are mothers desperate to provide for their children, fathers unable to find work or the vulnerable battling addiction, illness or just old age. They are the one in five who are living below the poverty line within the United Kingdom.

These are not faceless individuals, each one has a story of hardship, a tail of heating the home or feeding the family, of parents missing meals so their children can eat. They are the lonely child in the corner of the classroom unable to concentrate on their school work because they are hungry or knowing they will go home from school and there won’t be a hot meal for them on the table. This might sound an over dramatization of the problem but in our opulent society this a very real issue for many people and families.

Each week sixty to seventy people pop into the Foodbank in Portadown to ask for help.  They receive £25 of the most basic staple food stuffs to enable them to feed themselves and their families – but that help is limited. They are only entitled to attend a Foodbank and ask for help three times in six months, that is £25 worth of food every two months and  they can only receive that help if they are referred to the Foodbank by St Vincent de Paul, the PSNI neighbourhood team, Women’s Aid, the Probation Service, doctors or Migrant Support networks. It is controlled and it is regulated and it can only help them if you, the general public, support the charity by donating food. The main supermarkets such as Tesco and Asda will supplement your donations by 30%.

Without a doubt there should be no place in our society for Foodbanks and I wish they didn’t exist. Yet right now there is without a doubt a need for Foodbanks and this is supported by the fact the Portadown Foodbank, which has been operating for five years, gives away £2000 worth of food per week to those who are in desperate need. This effort is supported by volunteers such as Patrick, Alex a retired schoolteacher and Tom a civil engineer; individuals who can show empathy and compassion to those who need it regardless of their background and circumstances. They don’t just hand out the food which is a short term measure but they take time to listen and signpost individuals to other agencies that can support their needs in the long term. Any one of us could find ourselves in a financial crises and any one of us could find ourselves looking to Foodbanks for help. It is not a new phenomenon but it is now more prevalent than it has ever been.  So I challenge all those who live in Portadown, when you see Foodbank collectors or you see the Foodbank sign just stop and reflect. A donation of a bag of pasta or rice or a few tins of low cost soup could very well keep a family unit together, it may well provide lunch for a child or an elderly couple. If nothing else it will help you reflect on those who are either less fortunate than you or who are in a position you yourself may well have found yourself in previously.

So now what do you think when you hear the word ‘Foodbank’?

Doug Beattie MC is an Ulster Unionist councillor representing Portadown and a candidate for Upper Bann in the forthcoming Assembly elections.