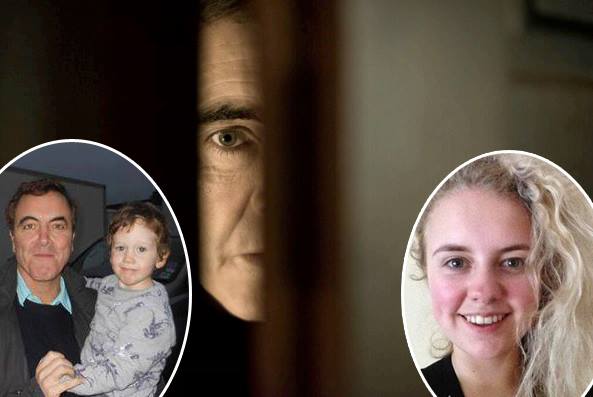 And two young County Armagh actors will be front and centre in ‘The Secret’ as they play the son and step-daughter of the murderous dentist.

James Nesbitt stars as Colin Howell, who conspired with Hazel Buchanan (played by Genevieve O’Reilly) to kill off their spouses and make it look like a suicide pact.

The four-part drama was filmed on location around Northern Ireland, mainly around the North Coast and inside the former Crumlin Road Gaol.

The three-year-old was taken to a casting staged by Extras NI when he matched the description of the child producers were looking for for the role.

He spent 10 days filming and now – at the tender of age of three – already has the acting bug, due to appear in the musical Strive, which is being produced by thre Pamela Cassells School of Performance.

Also appearing in ‘The Secret’ – based on Deric Henderson’s book ‘Let This Be Our Secret’ – is 17-year-old Emma Horan.

The Lurgan singer and actress plays the part of Katie, Colin Howell’s step-daughter, in the drama.

Both Murray and Emma are part of the Universal Youth Agency and attend acting classes with the Pamela Cassells School of Performance.

The catastrophic events unfolded in Castlerock in 1991, with the discovery of two bodies in a carbon monoxide filled car. Former nurse Lesley Howell, and police officer Trevor Buchanan, have apparently taken their own lives together.

But as we all know now, that was the not the case and this is the true story of a Sunday school teacher and a respectable dentist who formed a murderous partnership.

Hazel Buchanan and Colin Howell meet at their local Baptist Church in Coleraine, and embark upon a passionate and destructive affair, which climaxes in an elaborate plot to commit the ‘perfect murder’ to kill both their partners, Lesley and Trevor, and make it look like a suicide pact.

The killers fool the police and get away with murder, but their relationship soon sours and they separate.

They rebuild their lives, each remarrying and prospering, but can never escape what they have done.

As a series of disasters befalls Howell, he finally confesses his crimes to the horrified elders of his church.

Convicted of murder, Howell implicates Hazel in the killing. Hazel admits involvement but pleads not guilty, claiming she was coerced.

In a climactic murder trial, Howell gives evidence against his former lover…

Deric Henderson, on whose book the drama was based, said: “Colin Howell spent the best part of two years preparing for the court case, he had rehearsed his lines. They weren’t just spontaneous, they didn’t just come out there and then when he was in court. Howell knew he was going to have a captive audience.”

James Nesbitt – who hails from Coleraine himself – is outstanding in the role, but admits it was difficult to bring to the screen.

“It was hard for us to play these lovers who turn into murderers, because you have to try and find what they saw in each other to make them go that far,” said the actor.
“Had Hazel been forgiven for leaving him? I don’t think so, I think it was very clear that he wanted her. After a while the relationship stops and she begins to see another man, which probably devastated him. I think he was very much in love.

“For his life to be the perfect life he wanted to be a very successful dentist, a pillar of the church community, a wonderful family man.”

The first part of ‘The Secret’ will be shown on ITV tonight (Friday) at 9pm.