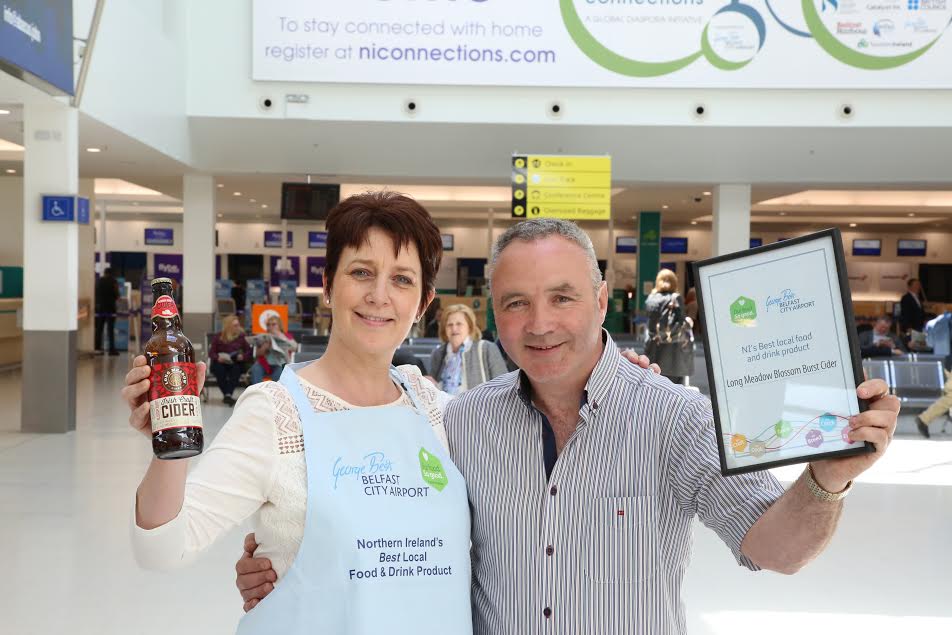 George Best Belfast City Airport has announced that a cider product from Portadown has been crowned the winner of a competition offering one local food and drink producer £30,000 of marketing support and brand visibility at the airport. Pictured are Catherine and Pat McKeever of Long Meadow Cider, whose Long Meadow Cider was crowned NI’s Best local food and drink product.

A Portadown produced cider has been named Northern Ireland’s ‘Best’ by a leading UK food critic.

The judging panel of food and drink experts was headed by Charles Campion, one of the UK’s most high-profile food critics.

George Best Belfast City Airport announced Long Meadow Blossom Burst Cider had been crowned the winner of the competition which offered one local food and drink producer £30,000 of marketing support and brand visibility at the airport.

The competition was launched in partnership with Food NI and local councils in January to find the ‘Best’ local food and drink product.

The tasting session was the final stage of the competition, which also involved a detailed application process and a two-week social media competition.

“Over 2.67 million passengers from across the world travel through the airport each year and to receive this amount of exposure will help significantly elevate the profile of Long Meadow Blossom Burst Cider to an international level.”

Long Meadow Cider is owned by husband and wife, Pat and Catherine McKeever. Managing Director Pat commented: “We are totally overwhelmed to win this fantastic prize and would like to say a huge thank-you to the organisers. To just make the final shortlist was a massive achievement in itself, and to be named winner amongst such strong competition is a major honour.

“The marketing prize and the brand exposure we will receive through Belfast City Airport will have a phenomenal impact on our business. We are a family firm that is extremely passionate about what we do and this prize will help take our product to another level.”

Michele Shirlow, CEO of Food NI, said: “Huge congratulations to our winner, Long Meadow Blossom Burst Cider, and also to our nine incredible finalists, each of whom has done exceptionally well to reach this stage of the competition.

“I would also like to thank everyone on our judging panel, and I want to offer a special word of thanks to celebrated food critic Charles Campion for his invaluable input.”

Charles Campion, acclaimed food critic for The Times, The Daily Telegraph and the London Evening Standard, said: “Long Meadow Blossom Burst Cider is a worthy winner of this fantastic competition and it was a pleasure to be on the judging panel.

“This initiative is further evidence that Northern Ireland is truly making its mark in the global food and drink market.”

For more information on the competition, visit  www.belfastcityairport.com/foodni