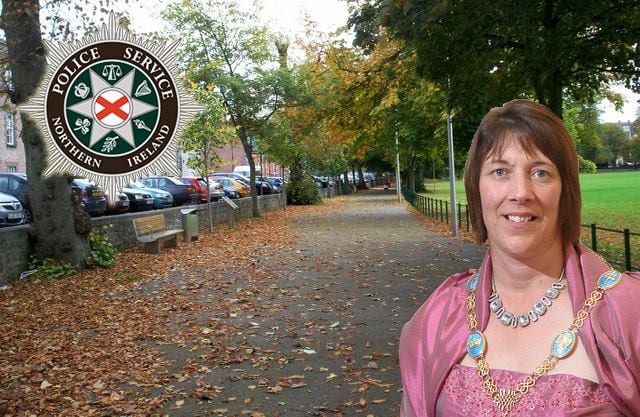 Anti-social behaviour on the Mall in Armagh is to be tackled head-on after an incident of indecent exposure prompted public outrage this week.

Police are to meet with local councillors and the Mall Trustees on Tuesday to discuss what can and will be done to stamp it out.

And it was local DUP Councillor Freda Donnelly who has led the initiative and insisted enough is enough.

The city councillor has arranged the meeting after reading on Armagh I how a local mum had been left shocked and disgusted after a man exposed himself and urinated as she walked along the Mall with her daughters.

The police have now made a public appeal for information.

Donna Livingstone and her girls – aged nine, 13 and 16 – were also subjected to verbal abuse on Wednesday evening from the same man and his female drinking companions.

We reported the story a short time after the episode and our social media platforms were inundated with similar complaints and stories.

Our readers complained of being almost too afraid to set foot on the Mall as drinking on the public park – although prohibited under bylaws – is commonplace and frequent.

Tommy McAllister wrote: “These same ones seem to be there every day actually, seen them yesterday around two – they were that drunk two of the girls started fighting with each other.”

Hannah Morton commented: “My cousin and I were out walking round the Mall last night….four boys drinking on the grass! Shouting at passersby and one was urinating down a tree. He must have thought he was doing it discreetly…absolutely disgusting! Then they proceeded to stagger across the grass to the other side of the Mall, one using a crutch! Cut out the DLA for lazy brats, I bet none of them had to get up for work this morning!”

Said Peter Scott: “The police know about these scumbags but don’t seem to give a toss. Saw probably the same ones drinking across from the Royal School as the kids were coming out. Five of them drinking, urinating and ripping branches off trees. The Palace Grounds is another alcoholic’s paradise. Time to sort this out PSNI.”

And Sabrina McClelland added: “It‘s disgusting and down right disrespectful. My kids love the freedom of playing on the Mall or exploring through the forest at the Palace Grounds, but on a few evenings out it had to be cut short due to sleeping drunks lying around the Palace, broken glass all over the Palace and the Mall, seen grown men urinate, shout foul language and girls lying spaced out. It is shocking though I agree with other posts on here it’s a lot more than alcohol some of these low-lifes are taking. I should not have to explain to my young kids nor should they have to see this especially in public family areas ????????????”

It was reports of these similar experiences and incidents – and many, many more like them – which has prompted Donna on.

She has contacted the police and reported the incident, with officers now looking at CCTV images.

Donna also contacted the council and is hoping to speak to the Mall Trustees.

She had suggested putting up signs reminding people of the drinking in public places bylaws but was told some believed it would “not set a good image of the Mall area”.

But Donna added: “I believe drinking alcohol, smashing bottles, indecent exposure and urninating is not how we the public want Armagh represented!”

She has called on local people to report incidents to police and wants the statutory agencies – including council – to be more proactive in dealing with this issue.

“It really is their best interest when it’s an iconic landmark used by locals and visited by tourists,” she said.

“The police I have to say have been very good, as has Freda Donnelly who, seeing Armagh I, has set up a meeting with police, council and Mall Trustees.”

Highlighting her experiences on Armagh I and knowing that others had witnessed similar and were furious too, is what actually inspired Donna to take the matter further.

She hopes the people of Armagh will stand together to reclaim the Mall for families, walkers, joggers and the general public to enjoy.

“Thank you for your help…it gave me the confidence to go forward and address,” added Donna.

Councillor Freda Donnelly, meanwhile, confirmed a meeting had been arranged for Tuesday in light of our report.

She told Armagh I: “The Mall is a beautiful part of Armagh City and something needs to be done about behaviour from people who are nothing more than thugs.

“It’s important to get as many people involved as possible.”

Incidents can be reported to the PSNI using the non-emergency number 101.

A PSNI spokesperson told Armagh I : “It was reported to police that sometime between 7.15pm and 7.30pm a woman and her three daughters were walking in the area when a man verbally abused and urinated in view of them. It is believed this man was accompanied by three females.

“Anyone who knows anything about this incident is asked to contact Armagh Police Station on the non-emergency number 101, quoting reference number 258 of 16/06/16.”