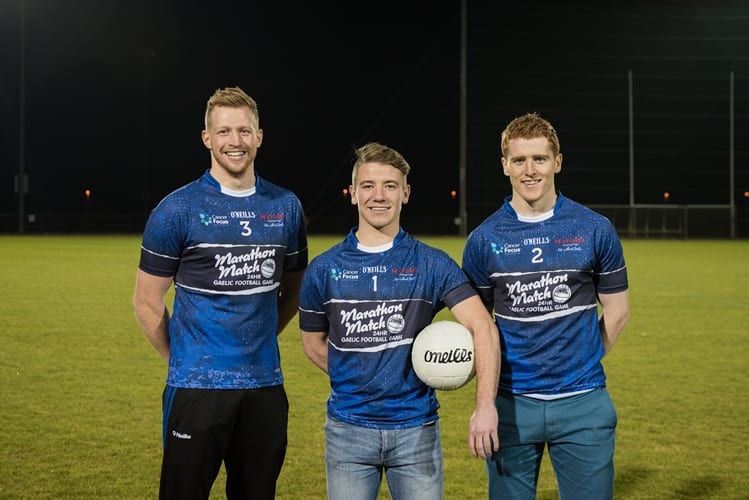 Cancer Focus Northern Ireland and Michaela Foundation are seeking 42 enthusiastic footballers to break the Guinness World Record for the longest Gaelic football match in history – and raise valuable funds for them at the same time.

The ‘Marathon Match’ in partnership with O’Neill’s International Sports, takes place on January 7th/8th in the Tyrone GAA Garvaghey Centre.

The record-breaking attempt will see Cancer Focus NI and Michaela Foundation teams go head to head for a total of 24 hours – a world first. Eoin Treanor, Community Fundraiser with Cancer Focus NI, said: “The Marathon Match is an ideal event for anyone who loves GAA, wants to become a Guinness World Record holder and wants to help two local charities raise much-needed funds for their services.

“We’re calling on anyone who would like to take part to contact us as soon as possible to register their interest in being part of Gaelic footballing history.”

The game already has some of the game’s greatest managers and coaches signed up to help both teams reach the 24 hour mark.

Tyrone GAA manager Mickey Harte said: “I’m delighted and honoured to be associated with such an amazing and novel event and can’t wait for the throw in.

“We’re looking for male players aged 18 years and over, from across Ulster and Ireland who would like to play a part in this historic game.

“Players are not expected to play for the full 24 hours, Guinness are allowing each team to use six substitutes as many times as we like throughout the game, therefore each player will be able to recover throughout the attempt whilst also availing of rest breaks that are accumulated for every one hour of activity played.

“However, this is still a huge feat and will require two full squads of 42 players to lighten the load on other players and break the World Record. ”

Michaela Foundation inspired by the life and values of Michaela McAreavey, aims to support and inspire young people in Ireland to lead happy and fulfilled lives without limits. Michaela Foundation organises summer camps and other initiatives for young people that encourage the practice of all the values that Michaela, her family and friends hold dear, such as the Irish language, faith, fun, well-being and fashion.

John Mc Areavey, Chairman of Michaela Foundation, said: “The response to Marathon Match has been exceptional so far. We’re delighted to have the backing of our main event sponsors O’Neill’s and the high calibre managers and coaches that are already involved, not to mention the amazing facilities at Garavghey that Club Tyrone have so kindly made available to us.

“Now all we need are the players to fill our jerseys, so we’re urging anyone who is interested to get in touch and help us achieve a Guinness World Record.”

If you are interested in taking part at Garvaghey on January 7 and 8 you can contact the Marathon Match team by emailing fundraising@cancerfocusni.org, by calling 028 9066 3281 or by visiting the Facebook or website pages of Cancer Focus NI or Michaela Foundation.

Applications to take part close at 10am on Wednesday, November 16.