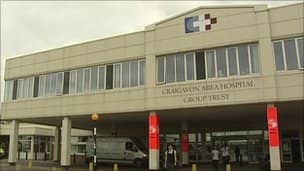 A WARD at Craigavon Hospital had to be evacuated as the result of a small electrical fire, it has emerged.

Five fire appliances sped to the scene at around 5pm on Tuesday, clearing Ward 2 South of 12 patients after a bed pan washer caught fire. They were moved to the adjacent 2 North as a precaution.

A statement from the hospital said that the trust’s Fire Incident Plan was immediately activated, the area was secured and the fire was quickly contained. All patients were able to return to the ward a short time later.

“In this case, the staff response was excellent, all procedures were followed and there was no risk to patient safety.”

A spokesman for the NI Fire and Rescue Service said that the five tenders were rushed to the scene as part of the Incident Plan.

“No chances can be taken where a hospital is involved,” he said. “In the case of this small fire, it was possible to move the patients for a short time to an adjacent ward, but a hospital fire can have far-reaching consequences, and we went through the normal procedures. The fire in this case was quickly and easily contained.”