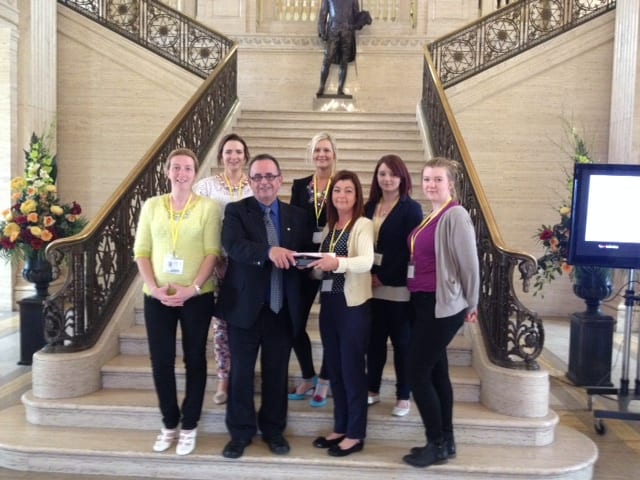 A petition demanding the restoration of funding to secure the future of Armagh’s Firs Playgroup has been handed over at Stormont today (Monday).

Staff and parents from the group, which caters for 34 families across the city and district, joined Newry and Armagh SDLP MLA Dominic Bradley to lodge the petition at Parliament Buildings.

Well over 2000 people signed the petition and, according to Mr Bradley, thousands more signatures on other petitions against Early Years funding cuts will be handed over in the coming days.

Armagh I reported in April that the Firs Playgroup, based at Station Road in Armagh, could be forced to shuts its doors after it was revealed that more than £14,000 in funding was being slashed from its budget.

Education Minister John O’Dowd’s reduction of £2 million through the Department’s Early Years Budget could mean the cross-community facility will no longer be able to survive.

Some additional funding should allow it to reopen in September but that is likely only to keep it in place for a matter of months.

Mr Bradley explained: “The Minister of Education’s unilateral decision to slash the Early Years budget is having a devastating impact locally.

“Many groups are impacted, but the very future of Firs is at risk unless John O’Dowd listens to the concerns of the people of Armagh City.

“Firs is an extremely popular facility and used by all sections of our communities.

“They have been overwhelmed by the support from the community across Armagh City and District with over 2000 people signing the petition I have lodged today.

“In the coming weeks we will also see the Early Years sector lodge more petitions with thousands more signatures.”

Mr Bradley accused the Minister of “not listening” to the Early Years sector. He said:”In fact last week when I raised the plight of some of the groups during proceedings at the Assembly he was dismissive of the facts I was using to show the real impact of his cuts. He has completely lost touch with the sector.

“Across the North the Early Years Fund has benefited 153 communities and created 177 jobs. It supports 2,500 early years places and has helped 620 children with special educational needs and 250 children whose first language is not English.

“The 2,500 places – 1,600 of which are in the funded pre-school sector, with 900 places for younger children in a variety of settings – have been supported by the Department of Education fund.’

“The 1,600 places are vulnerable because the settings have small numbers of funded pre-school places yet require at least two members of staff.

“If the staff who are paid for out of the Department of Education fund are lost, those settings will simply not be able to survive.

“There are no other sources of funding for the 177 staff who are supported by the Department of Education fund. The figures are not alarmist, as some have suggested, nor are they inaccurate. They are factually correct. That is why the groups have been funded up until now.

“In lodging this petition on behalf of the people of Armagh, I am calling on the Minister to listen to the people and to understand the real impact of his cuts before it is too late.”