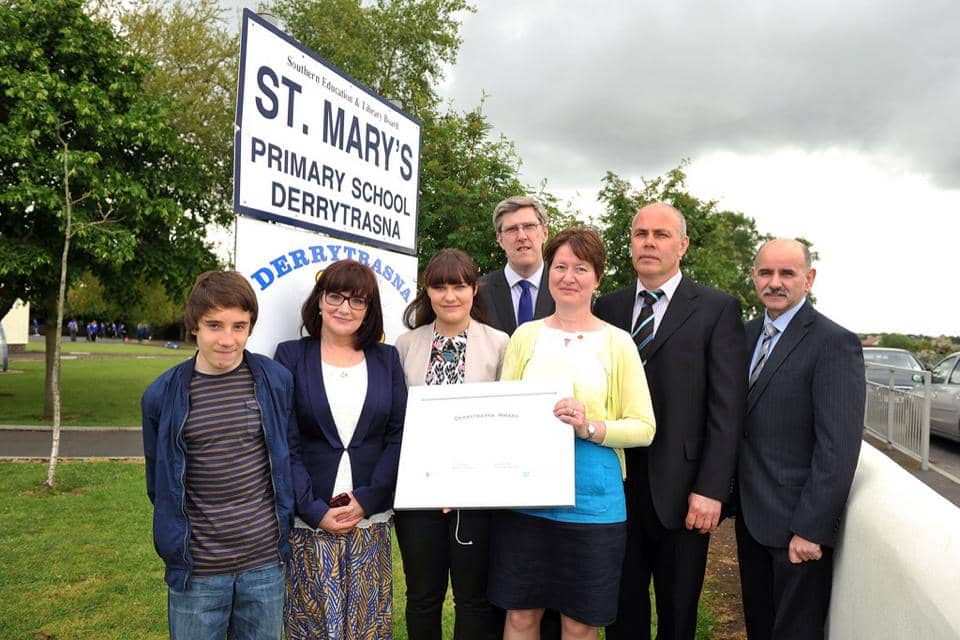 The support and love shown by staff of a Co Armagh primary school to one of its pupils, after she was diagnosed with terminal cancer, has inspired a new Provincewide award for pastoral care.

But all at St Mary’s Primary School in Derrytrasna did everything they could to make her last days as happy and special as possible.

Both, pictured last June with the Madden family, together with Joan Aldridge, principal of St Mary’s Primary School, have today formally opened nominations for the new award, which will be named the ‘Derrytrasna Award’ in recognition of the school’s outstanding pastoral care to Adele and her family.

It will recognise school communities that have demonstrated exceptional co-operative effort in supporting the pastoral care of pupils and their families.

There will be one award each for the primary and post-primary sectors.

Minister O’Dowd, speaking today, Thursday, said: “I am honoured to launch the Derrytrasna Pastoral Care Award today. We rightly expect our schools to nurture and encourage our children and young people to fulfil their potential and perform to the best of their ability, and such work goes on every day through the academic year.

“Occasionally there are school communities that make that extra effort and go beyond what is reasonably expected to support a child or young person facing a particular challenge or hardship.

“I believe that it is important that we take the time to recognise and celebrate such exceptional practice, which is what this award will do.”

The Minister continued: “The award is named in honour of St Mary’s Primary School in Derrytrasna, County Armagh, which provided outstanding, heartfelt and hugely valued pastoral care and support over a period of many months for a terminally ill pupil.

“The pupil’s family emphasised how the support the school gave helped make her last days at school a happy, special experience.

“This new award will honour exceptional support like this by local schools in the primary and post-primary phase.

“It is a privilege for me as Minister to open the call for nominations and I encourage anyone who knows of a school delivering such exceptional pastoral care to nominate the school.”

Dr Eddie Rooney added: “The compassion shown by St Mary’s Primary School has helped us all to appreciate the important role played by school communities in supporting pupils and their families.

“This award will inspire others to follow the example set by St Mary’s in promoting the physical, social and emotional wellbeing of the community. I am delighted to join Minister O’ Dowd in launching the Derrytrasna Pastoral Care award.”

For more information about the award and details of how to nominate a school, visit the website: derrytrasnapastoralcareaward