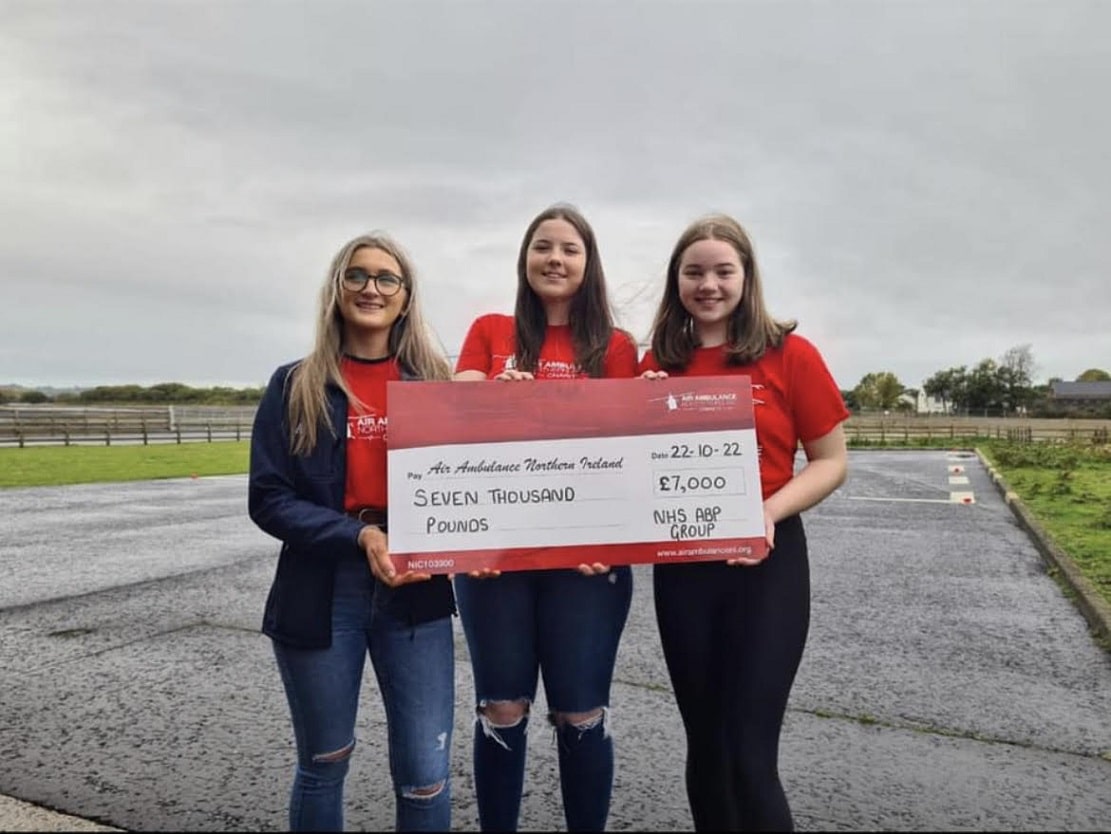 Aimee McComb, Sophie McKnight and Ellen Bailie, with the cheque of £7,000 for Air Ambulance NI

After organising a string of successful events, from a ‘Farm to Fork Festival’ to a Tractor Run, three Newtownhamilton High School girls have seen their hard work pay off as they presented a cheque of £7,000 to Air Ambulance NI.

Aimee McCombe, Ellen Bailie and Sophie McKnight are finalists in the ABP Angus Youth Challenge, which they achieved following stiff competition in front of a panel of industry experts, competing against 18 other teams across Northern Ireland.

The finalists were given a mini-herd of Angus cross calves courtesy of ABP and the Northern Irish Angus Producer Group, which they have to rear through to beef.

The final of the ABP Angus Youth Challenge will be taking place this Friday, October 28, and the winning team will be bringing back a £1,000 cash prize to their school. The girls managed to bring in the amazing figure of £7,000 for Air Ambulance, through a number of events that they organised as part of the Angus Youth Challenge.

Back in September, they organised Newtown’s first ever ‘Farm to Fork Festival’, alongside a hugely successful Tractor Run which brought 96 tractors out onto the streets in support of Air Ambulance. The girls even managed to gain a nomination for an award at the Newry, Mourne & Down District Council Civic Awards on September 7.

Most recently, their raffle – which boasted the first prize of a one night stay for two in Killeavy Castle Estate – managed to rake in £4600.

Hosted by Sophie McKnight and Ellen Bailie, and with Hannah Babe from Air Ambulance drawing the tickets – in a shed kindly granted by McKnight Agri – a total of 38 prizes were drawn from over 900 tickets sold. At the end of it all, the girls finally reached their total of £7000, which they say, they are delighted to have achieved.

Speaking to Armagh I, Sophie said: “To have raised £7,000 for the Air Ambulance, a charity close to our hearts and an essential service in the agriculture community, was beyond our expectations! Through various fundraisers we managed to achieve this amazing total, with our last event being the very successful raffle, totalling over £4600. This helped us to exceed our original total of £1,000! We are all thankful for the help of Mrs Alexander, our mums and Nicole on this amazing journey.”

Aimee said: “I am absolutely thrilled that we raised £7000 for the Air Ambulance NI. It certainly was not the total I expected, that three girls from a rural school could raise this through various fundraisers. It’s certainty a worthwhile charity.” Amy Henshaw from the Air Ambulance with the girls